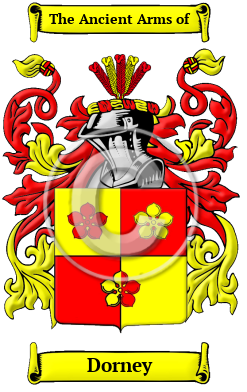 Early Origins of the Dorney family

The surname Dorney was first found in Kerry (Irish: Ciarraí) part of the former County Desmond (14th-17th centuries), located in Southwestern Ireland, in Munster province, where they held a family seat as the Viscounts Clanmaurice seated at Abbeydorney. Irish history was greatly influenced by the Norman invasion of 1172, and thereafter, the surnames of Irish Gaelic clanns and septs and many of the Norman families became almost indistinguishable. This family name was found later in Cork but the name is mostly found in Ulster and here represented the first recorded reference to the name.

As far as the Dorney variant is concerned, "Woulfe makes this Cork and Tipperary name Ó Doirinne. It takes the form Durney in east Munster." [1]

The Torney variant descends from the Irish O'Torna, (descendant of Torn) "Torney is now a pretty common family- name, the correct form of which is O'Torna. According to O'Curry, they derive their name from the celebrated poet Torna Eigeas, who flourished in the fourth century; and they inhabited the district of O'Torna in the North of Kerry." [2] "Ó Torna This name is mainly found in Ulster; but it is also a synonym of Dorney of Cos. Cork and Kerry." [3]

Torna Éices nicknamed Éices or Éces ("the poet, sage"), was noted as "the last great bard of Pagan Ireland." He was the foster-father of the Irish kings Corc and Niall of the Nine Hostages.

Early History of the Dorney family

This web page shows only a small excerpt of our Dorney research. Another 70 words (5 lines of text) are included under the topic Early Dorney History in all our PDF Extended History products and printed products wherever possible.

More information is included under the topic Early Dorney Notables in all our PDF Extended History products and printed products wherever possible.

Dorney migration to the United States +

Dorney Settlers in United States in the 19th Century

Dorney Settlers in Canada in the 19th Century