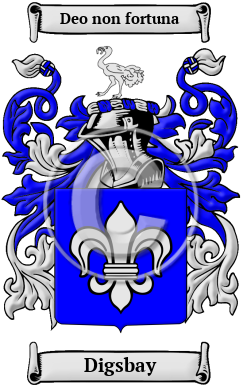 The ancestors of the bearers of the Digsbay family name are thought have lived in ancient Anglo-Saxon England. They were first found at a local where someone lived by a dike or ditch.

The family are "from Digby, a town in the county of Lincoln, England, so named from the Danish Dige, a dike, ditch, or trench, and by, a town—the town by the dike." [1]

Of particular note today is Coleshill, Warwickshire, the home to Sir Robert Digby (1574-1618.) In 2021, his estate named Coleshill Manor is an archaeological site undertaken by Wessex Archaeology for LM which has revealed "one of the best preserved late 16th century gardens ever discovered in this country." (HS2.org)

Early Origins of the Digsbay family

This area continued for two centuries as a stronghold of the family as seen in the Hundredorum Rolls of 1273 which listed Alice de Digpeby as holding lands there at that time. [3]

"The noble family are of great antiquity in co. Warwick." [4] So as to underscore this point, we found Simon Digby listed in the Feet of Fines for Warwickshire in 1497. [5]

Early History of the Digsbay family

Until quite recently, the English language has lacked a definite system of spelling rules. Consequently, Anglo-Saxon surnames are characterized by a multitude of spelling variations. Changes in Anglo-Saxon names were influenced by the evolution of the English language, as it incorporated elements of French, Latin, and other languages. Although Medieval scribes and church officials recorded names as they sounded, so it is common to find one person referred to by several different spellings of his surname, even the most literate people varied the spelling of their own names. Variations of the name Digsbay include Digby, Digbie and others.

Notables of the family at this time include Sir Everard Digby (1578-1606), conspirator involved in the abortive 1605 Gunpowder Plot to assassinate King James I of England and VI of Scotland and Members of the Parliament of England. He was found guilty and unremorseful, and executed as a traitor. Despite his father's actions, his son Sir Kenelm Digby (1603-1665), became an English courtier and diplomat. He was also a highly reputed natural philosopher, and known as a leading Roman Catholic intellectual and Blackloist. Other notables include: John Digby...
Another 87 words (6 lines of text) are included under the topic Early Digsbay Notables in all our PDF Extended History products and printed products wherever possible.

Migration of the Digsbay family to Ireland

Some of the Digsbay family moved to Ireland, but this topic is not covered in this excerpt.
Another 39 words (3 lines of text) about their life in Ireland is included in all our PDF Extended History products and printed products wherever possible.

Migration of the Digsbay family

Searching for a better life, many English families migrated to British colonies. Unfortunately, the majority of them traveled under extremely harsh conditions: overcrowding on the ships caused the majority of the immigrants to arrive diseased, famished, and destitute from the long journey across the ocean. For those families that arrived safely, modest prosperity was attainable, and many went on to make invaluable contributions to the development of the cultures of the new colonies. Research into the origins of individual families in North America revealed records of the immigration of a number of people bearing the name Digsbay or a variant listed above: Charles Digby who settled in Montserrat in 1663; Edward Digby was one of the original settlers in Maine in 1607; John Digby settled in Jamaica in 1661.