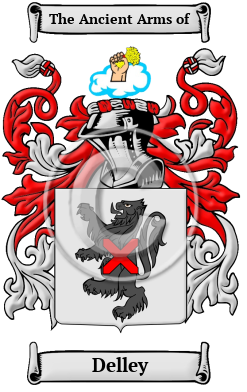 Delley is a name of ancient Anglo-Saxon origin and comes from the family once having lived beside the water. The surname Delley originally derived from the Old English word dell which referred to someone who inhabited an area close to a body of water or glade. [1]

Early Origins of the Delley family

The surname Delley was first found in Suffolk where the Hundredorum Rolls of 1273 list Ralph de la Dale and Thomas de la Dale as holding lands there at that time. [4]

Early History of the Delley family

Sound was what guided spelling in the essentially pre-literate Middle Ages, so one person's name was often recorded under several variations during a single lifetime. Also, before the advent of the printing press and the first dictionaries, the English language was not standardized. Therefore, spelling variations were common, even among the names of the most literate people. Known variations of the Delley family name include Dell, Delle, Dells and others.

Notables of this surname at this time include: William Dell (c. 1607-1669), an English clergyman from Bedfordshire, Master of Gonville and Caius College, Cambridge from 1649 to 1660, and prominent radical Parliamentarian. Jonas Dell (d. 1665), was an English Quaker, who died at Stepney...
Another 43 words (3 lines of text) are included under the topic Early Delley Notables in all our PDF Extended History products and printed products wherever possible.

Delley Settlers in Australia in the 19th Century