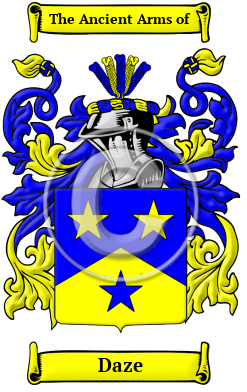 The Daze surname seems to have come from a few sources: it was an occupational name for a dairy maid in some parts of England and Scotland; it was a derivation from David; and in some cases the name came from the word eye (d'eye). The same source claims that name was could have been an occupational name as in 'the deye' or 'day,' a maid, a dairy-maid. [1] Over in Normandy pre-Conquest times, we found "St. John de Day, near St. Lo, in the Cotentin [Peninsula.] " [2] This peninsula is now known as Cherbourg Peninsula.

Early Origins of the Daze family

The surname Daze was first found in Somerset where one of the first records of the name was Leofgife oa Dagean c. 1055. Godiua Daia was listed c. 1095 in Suffolk and Aluric Dai was listed in the Pipe Rolls for Buckinghamshire in 1196. A few years later, Ralph Deie was among those listed in the Register of the Freemen of Leicester in 1211. [3]

Early History of the Daze family

Spelling variations of this family name include: Day, Dea, Dey, Daye, Deie and others.

Notables of this surname at this time include: William Day (1529-1596), an English clergyman, Provost of Eton College, Bishop of Winchester; George Day (ca.1501-1556), Bishop of Chichester, Vice-Chancellor of Cambridge University (1537-1538); John Day (1574-1638?), an English dramatist from Norfolk; and Francis Day (1605-1673), an English colonial administrator, associated with the East India Company. John Day (Daye) (c. 1522-1584), was an English Protestant printer. He was "one of the earliest of English musical typographers, began printing about 1549 in Holborn, a little above the Conduit. He afterwards dwelt 'over Aldersgate beneath Saint Martyns,' and subsequently had a shop in St. Paul's Churchyard...
Another 146 words (10 lines of text) are included under the topic Early Daze Notables in all our PDF Extended History products and printed products wherever possible.

Migration of the Daze family to Ireland

Some of the Daze family moved to Ireland, but this topic is not covered in this excerpt.
Another 63 words (4 lines of text) about their life in Ireland is included in all our PDF Extended History products and printed products wherever possible.

Migration of the Daze family

Some of the first settlers of this family name or some of its variants were: Stephen Day who became a prominent merchant in Virginia soon after arriving in 1638. Another Stephen Daye (1594-1668), was the first printer in New England, and produced the first book printed in the English colonies. Cambridge Massachusetts granted his three hundred acres of land for &quot.