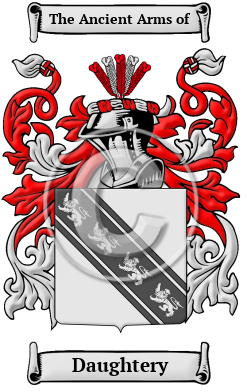 Daughtery is a name that came to England in the 11th century wave of migration that was set off by the Norman Conquest of 1066. The Daughtery family lived in Sussex at Moor House, Petworth, not far from Battle Abbey. [1] Hawtrie is an adaptation of Hauterive, Normandy, the name of which literally means high river.

Early Origins of the Daughtery family

The surname Daughtery was first found in Sussex where they held a family seat as Lords of the Manor of Heringham. Soon after the Domesday Book survey, a census initiated by Duke William of Normandy after his conquest of England in 1066 A.D., the family built Heringham Priory. [2] The first Norman noble to settle was from Hauterive, probably assuming the cognate 'de Hauterive'. He came from the arrondisement of Alencon in Normandy. It is most likely a corruption of the Norman Hauterive which produced the family name but, strangely, Dawtry and Dealtry have also been attributed to the same source, this from a Latinization of the location of their estates in Sussex, i.e., De Alta Ripa, a high bank or cliff. The Dawtries, the main house of which is in Petworth parish, are one and the same as the Hawtries.

Early History of the Daughtery family

This web page shows only a small excerpt of our Daughtery research. Another 100 words (7 lines of text) covering the years 1659, 1758 and 1767 are included under the topic Early Daughtery History in all our PDF Extended History products and printed products wherever possible.

Spelling variations in names were a common occurrence in the eras before English spelling was standardized a few hundred years ago. In the Middle Ages, even the literate regularly changed the spellings of their names as the English language incorporated elements of French, Latin, and other European languages. Many variations of the name Daughtery have been found, including Hawtre, Hawtree, Hawtrie, Dawtre, Dawtree, Dawtrie, Hawtrey, Haultrey, Dealtre, Dealtrie, Dawtrey, Dawtry, Daltry, Haltry, Haltrie and many more.

Outstanding amongst the family at this time was William Dawtrey, Esq. of Moor House, Doddinghurst, died s. p. in 1758, having bequeated his estates to (the son of his sister Sarah) his nephew, and heir, Richard Luther,, Esq. of Myles's, in Essex, who m. Charlotte, daughter of Dr. Hugh Chamberlen, the famous Court Physician, temp. Queen Anne, and-died at Vicars Hill, Hants, in 1767...
Another 63 words (4 lines of text) are included under the topic Early Daughtery Notables in all our PDF Extended History products and printed products wherever possible.

In the United States, the name Daughtery is the 11,249th most popular surname with an estimated 2,487 people with that name. [3]

Daughtery migration to the United States +

For many English families, the social climate in England was oppressive and lacked opportunity for change. For such families, the shores of Ireland, Australia, and the New World beckoned. They left their homeland at great expense in ships that were overcrowded and full of disease. Many arrived after the long voyage sick, starving, and without a penny. But even those were greeted with greater opportunity than they could have experienced back home. Numerous English settlers who arrived in the United States and Canada at this time went on to make important contributions to the developing cultures of those countries. Many of those families went on to make significant contributions to the rapidly developing colonies in which they settled. Early North American records indicate many people bearing the name Daughtery were among those contributors:

Daughtery Settlers in United States in the 19th Century