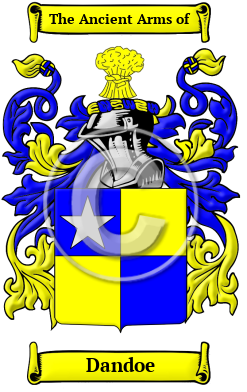 The history of the name Dandoe goes back those Anglo-Saxon tribes that once ruled over Britain. Such a name was given to a male, where it was originally used as a pet form of Andrew. [1] Essentially the surname Dandoe originally derived from the Old Scottish name Andrew.

Early Origins of the Dandoe family

The surname Dandoe was first found in Surrey in the parish of Leigh, where the Dendy family held estates and made sizable donations to the local church. [2] The first record of the family was Dandi (without surname) who was listed in Lincolnshire in the Hundredorum Rolls of 1271-1273. The same rolls list Richard Dande in Huntingdonshire. Later the Yorkshire Poll Tax Rolls of 1379 listed Willelmus Dandy, et uxor ejus and the Lay Subsidy Rolls of Lancashire listed Thomas Dandisone in 1332. [3] Adam Dandy was listed in the Register of Freeman of Yorkshire in 1312. [1]

Early History of the Dandoe family

This web page shows only a small excerpt of our Dandoe research. Another 96 words (7 lines of text) covering the years 1613 and 1674 are included under the topic Early Dandoe History in all our PDF Extended History products and printed products wherever possible.

Sound was what guided spelling in the essentially pre-literate Middle Ages, so one person's name was often recorded under several variations during a single lifetime. Also, before the advent of the printing press and the first dictionaries, the English language was not standardized. Therefore, spelling variations were common, even among the names of the most literate people. Known variations of the Dandoe family name include Dandie, Dandy, Dande, Dando and others.

Notables of this surname at this time include: Kerr Dand, son of the eighth Lord of Ferniehurst; and Edward Dendy (bap. 1613-1674), English Serjeant-at-Arms in the Long Parliament and for the Rump during the...
Another 34 words (2 lines of text) are included under the topic Early Dandoe Notables in all our PDF Extended History products and printed products wherever possible.

Migration of the Dandoe family

For political, religious, and economic reasons, thousands of English families boarded ships for Ireland, the Canadas, the America colonies, and many of smaller tropical colonies in the hope of finding better lives abroad. Although the passage on the cramped, dank ships caused many to arrive in the New World diseased and starving, those families that survived the trip often went on to make valuable contributions to those new societies to which they arrived. Investigation of the origins of family names on the North American continent has revealed that early immigrants bearing the name Dandoe or a variant listed above: Elizabeth Dande who settled in Boston in 1712; William Dando who settled in Barbados in 1654; Joseph Dando arrived in Philadelphia in 1838.