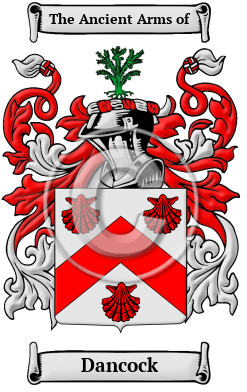 Tankersley is a parish, in the union of Wortley, wapentake of Staincross, in the West Riding of Yorkshire [2] and dates back to the Domesday Book of 1086 when it was first listed as Tancresleia. [3] Literally the place name means "woodland clearing of a man called Thancred," from the Old English personal name + "leah." [4]

Early Origins of the Dancock family

The surname Dancock was first found in Yorkshire where they held a family seat as Lords of the manor of Boroughbridge in that shire. They were descended from Tancred, son of the Good Marqis, who governed the principality of Antioch as Guardian of the Emperor Bohemond II. Tancred, whose barony was in Normandy in 912 A.D. was also the sire of the celebrated Tankervilles. Whixley in the West Riding of Yorkshire was home to one branch of the family.

"The living [of Whixley] is a perpetual curacy, valued in the king's books at £7. 17. 1.; net income, £68; patrons and impropriators, the Governors of the Tancred charities. Christopher Tancred, Esq., whose family were long seated at the Hall, at his death in 1754, left his house to be converted into an hospital for twelve decayed gentlemen, and endowed it with estates which, in 1815, were let for £2480 per annum." [2]

Much father to the south in Cornwall, the Tencreek family was found. This variant is rare today but at one time, they held many manors and estates. By example, at one time the manor of Ellenglaze, in St. Cuthbert belonged to the family of Tencreek. [5]

Early History of the Dancock family

Before the advent of the printing press and the first dictionaries, the English language was not standardized. Sound was what guided spelling in the Middle Ages, so one person's name was often recorded under several variations during a single lifetime. Spelling variations were common, even among the names of the most literate people. Known variations of the Dancock family name include Tancred, Tancard, Tancert, Tancrette, Tankard and many more.

Migration of the Dancock family to Ireland

Some of the Dancock family moved to Ireland, but this topic is not covered in this excerpt. More information about their life in Ireland is included in all our PDF Extended History products and printed products wherever possible.

Migration of the Dancock family

To escape the political and religious chaos of this era, thousands of English families began to migrate to the New World in search of land and freedom from religious and political persecution. The passage was expensive and the ships were dark, crowded, and unsafe; however, those who made the voyage safely were encountered opportunities that were not available to them in their homeland. Many of the families that reached the New World at this time went on to make important contributions to the emerging nations of the United States and Canada. Research into various historical records has revealed some of first members of the Dancock family to immigrate North America: Walter Tankard arrived in Virginia in 1716; William Tankard settled in Virginia in 1606; 14 years before the "Mayflower"; William Tankard settled in Maryland in 1774..