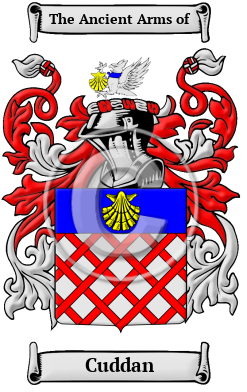 It was among those Anglo-Saxon tribes that once ruled over Britain that the name Cuddan was formed. The name was derived from Cuthbert in the patronymic form where it was used as son of Cutt. [1] Alternatively, the name could have denoted "the son, or family, of Cutha (famous)." [2]

Early Origins of the Cuddan family

The surname Cuddan was first found in Norfolk where Herlewin and WIllian Cutting were listed in 1221. Later, Richard Cutting was listed in the Feet of Fines for Essex in 1235. [1]

Early History of the Cuddan family

Distinguished members of the family include Francis Cuttinge (c. 1550-1595/6), English lutenist and composer. He "was one of the most distinguished composers of lute music towards the close of the reign of Elizabeth and the beginning of that of James. Nothing is...
Another 41 words (3 lines of text) are included under the topic Early Cuddan Notables in all our PDF Extended History products and printed products wherever possible.

Migration of the Cuddan family

Thousands of English families boarded ships sailing to the New World in the hope of escaping the unrest found in England at this time. Although the search for opportunity and freedom from persecution abroad took the lives of many because of the cramped conditions and unsanitary nature of the vessels, the opportunity perceived in the growing colonies of North America beckoned. Many of the settlers who survived the journey went on to make important contributions to the transplanted cultures of their adopted countries. The Cuddan were among these contributors, for they have been located in early North American records: Richard Cutting and his brother William were amongst the first settlers in the New World. They left from Ipswich England on the ship "Elizabeth&quot.