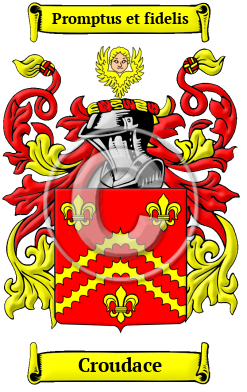 The roots of the name Croudace are found among the Strathclyde-Briton people of the ancient Scottish/English Borderlands. Croudace was originally found in the land of Carruthers in the parish of Middlebie, Dumfriesshire. Interestingly in that area, then name is pronounced "Cridders." [1]

Early Origins of the Croudace family

The surname Croudace was first found in Dumfriesshire (Gaelic: Siorrachd Dhùn Phris), a Southern area, bordering on England that today forms part of the Dumfries and Galloway Council Area, where by the 12th century the family had become hereditary Stewards of the Annandale district of the border allied to the Bruces and the Stewarts. One of the first records of the name was Simon Carruthers who swore an oath of allegiance to Edward I in 1296. A few years later, John de Carutherys received a charter of the lands of Musfald and Appliltrewayt in 1320. [1]

Early History of the Croudace family

This web page shows only a small excerpt of our Croudace research. Another 87 words (6 lines of text) covering the years 1344, 1429, and 1702 are included under the topic Early Croudace History in all our PDF Extended History products and printed products wherever possible.

More information is included under the topic Early Croudace Notables in all our PDF Extended History products and printed products wherever possible.

Migration of the Croudace family to Ireland

Some of the Croudace family moved to Ireland, but this topic is not covered in this excerpt.
Another 82 words (6 lines of text) about their life in Ireland is included in all our PDF Extended History products and printed products wherever possible.

Migration of the Croudace family

Unwelcome in their beloved homeland, many Scots sailed for the colonies of North America. There, they found land and freedom, and even the opportunity to make a new nation in the American War of Independence. These Scottish settlers played essential roles in the founding of the United States, and the shaping of contemporary North America. Among them: John Carruthers arrived in New York in 1804; followed by Robert and William who also arrived in New York in 1804; John and Sarah arrived in Charles Town [Charleston], South Carolina in 1772..