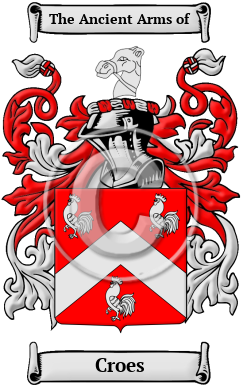 Croes is a name of Anglo-Saxon origin. It was a name given to a person who bore some fancied resemblance to a crow. This may have been based on appearance, but nicknames often described more intangible strong traits or features of animals. In the Middle Ages, anthropomorphic ideas were common; people attributed human qualities and form to animals, based on the creature's habits. The surname Croes is derived from the Old English word crowe, which in turn came from the Old English words crawe or crawa, which mean crow.

Early Origins of the Croes family

In Somerset, Hugh Crowe was listed 1 Edward III (during the first year of the reign of King Edward III.) [2]

Further to the north in Scotland, John Crow and Thomas Crow, were of the diocese of Dunblane, on record, 1470 and Magnus Crow, was a follower of Walter Ross of Morange, 1596 may have derived his name from Croy, Inverness-shire. [4]

Early History of the Croes family

Before the last few hundred years, the English language had no fast system of spelling rules. For that reason, spelling variations are commonly found in early Anglo-Saxon surnames. Over the years, many variations of the name Croes were recorded, including Crow, Crowe and others.

Notables of this surname at this time include: Sir John Crowe of Dromore; William Crowe (1616-1675) was an English clergyman and bibliographer from Suffolk; Sir Sackville Crowe, 1st Baronet, (c. 1611-1683) was an English nobleman and politician, Treasurer of the Navy (1627-1630), and British ambassador to the Ottoman Empire (c. 1641-1646); and Mitford Crowe or Crow (1669-1719), an English merchant, politician, diplomat and colonial administrator. Francis Crow (d. 1692), was a Scottish nonconformist divine who came of a family seated at Hughhead in Scotland...
Another 83 words (6 lines of text) are included under the topic Early Croes Notables in all our PDF Extended History products and printed products wherever possible.

Migration of the Croes family to Ireland

Some of the Croes family moved to Ireland, but this topic is not covered in this excerpt.
Another 79 words (6 lines of text) about their life in Ireland is included in all our PDF Extended History products and printed products wherever possible.

Croes migration to the United States +

To escape oppression and starvation at that time, many English families left for the "open frontiers" of the New World with all its perceived opportunities. In droves people migrated to the many British colonies, those in North America in particular, paying high rates for passages in cramped, unsafe ships. Although many of the settlers did not make the long passage alive, those who did see the shores of North America perceived great opportunities before them. Many of the families that came from England went on to make essential contributions to the emerging nations of Canada and the United States. Research into various historical records revealed some of first members of the Croes family emigrate to North America:

Croes Settlers in United States in the 17th Century