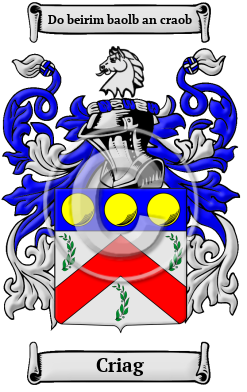 The surname is one of the many Irish surnames rooted in Gaelic language native to Ireland. The original Gaelic form of the name Criag is Craobhach, derived from the word "craobh," which means "branch."

Early Origins of the Criag family

The surname Criag was first found in County Clare (Irish: An Clár) located on the west coast of Ireland in the province of Munster, where this ancient Irish family was descended from King Niall of "the Nine Hostages," the great General King, who in turn was descended from the Heremon line of Irish Kings.

The Creaghs were one of the celebrated septs and leading gentry of the County Clare. They were a branch of the O'Neills of County Clare and tradition has it that they carried green branches with them into battle against the Norsemen at Limerick.

Their name is derived from the Irish surname Craobhach, which is the adjective formed from the noun "craob," a branch. Other names are derived from this source as well such as Cray, the anglicized form of O Craoibhe meaning "descendant of Craobhach."

Early History of the Criag family

Within the archives researched, many different spelling variations of the surname Criag were found. These included One reason for the many variations is that scribes and church officials often spelled an individual's name as it sounded. This imprecise method often led to many versions. Creagh, Crear, Creag, Creavagh, Cray and others.

Prominent amongst the family at this time was Richard Creagh (1525?-1585), born in Limerick, an Irish Catholic Archbishop of Armagh who died in the Tower of London. Called also Crvagh, Crewe, and in Irish O'Mulchreibe, he was born about 1525, being the son of Nicholas Creagh, a merchant of the city of Limerick. "On 8 May 1567 he was arrested in Connaught, and in August was tried for high treason in Dublin. Though acquitted, he was detained in prison, but he escaped soon afterwards. Before the end of the year he was recaptured, sent to London, and lodged in the Tower...
Another 169 words (12 lines of text) are included under the topic Early Criag Notables in all our PDF Extended History products and printed products wherever possible.

Migration of the Criag family

The 19th century saw a great wave of Irish families leaving Ireland for the distant shores of North America and Australia. These families often left their homeland hungry, penniless, and destitute due to the policies of England. Those Irish immigrants that survived the long sea passage initially settled on the eastern seaboard of the continent. Some, however, moved north to a then infant Canada as United Empire Loyalists after ironically serving with the English in the American War of Independence. Others that remained in America later joined the westward migration in search of land. The greatest influx of Irish immigrants, though, came to North America during the Great Potato Famine of the late 1840s. Thousands left Ireland at this time for North America, and those who arrived were immediately put to work building railroads, coal mines, bridges, and canals. In fact, the foundations of today's powerful nations of the United States and Canada were to a larger degree built by the Irish. Archival documents indicate that members of the Criag family relocated to North American shores quite early: Carmelo Creagh who settled in Philadelphia in 1878; along with Richard and Thomas; Isabella Creag settled in Pennsylvania in 1772; Michael Creier settled in Philadelphia in 1741..