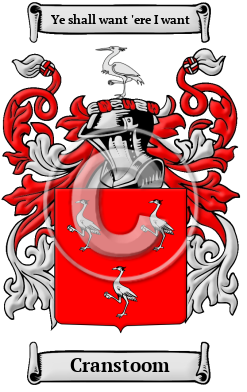 Scotland with its rugged terrain and rich ancestry was the beginning of the ancient family tree of the Cranstoom family. In Scotland, hereditary surnames were adopted according to fairly general rules and during the late Middle Ages, names that were derived from localities became increasingly widespread. Local names originally denoted the proprietorship of the village or estate. The Cranstoom family lived in "the lands or barony of the name in Midlothian, the 'tun of Cran or Cren.' Certain individuals of this name are mentioned in early charters but it is not now possible to establish their connection with one another. ' " [1]

Early Origins of the Cranstoom family

The surname Cranstoom was first found in Edinburghshire, a former county, now part of the Midlothian council area where Eric de Cranston witnessed a charter by William the Lion in the 12th century. An Andrew de Cragestone of Edinburghshire rendered homage to King Edward of England during his brief conquest of Scotland in 1296. It is thought that this name was actually Cranestone, as his seal bore the 'Cranstoun' crane. "Another Andrew de Cranstoun, dominus de eodem, apparently the first so styled, was dead before 1338. Thomas de Cranstoun, provost of Edinburgh, 1423. [1]

Early History of the Cranstoom family

Migration of the Cranstoom family to Ireland

Some of the Cranstoom family moved to Ireland, but this topic is not covered in this excerpt.
Another 59 words (4 lines of text) about their life in Ireland is included in all our PDF Extended History products and printed products wherever possible.

Migration of the Cranstoom family