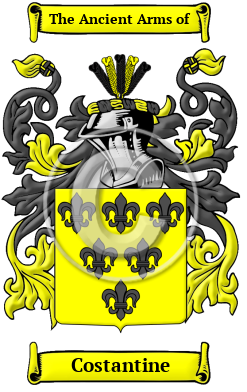 The ancient and distinguished surname Costantine is derived from the Old French name "Constantin," which is itself derived from the Latin "Constantinus," meaning "steadfast and faithful." This name was popular throughout Continental Europe, due to the first Christian Roman Emperor, Constantine the Great, for whom Byzantium was renamed Constantinople. The name was brought to England in the wake of the Norman Conquest.

Early Origins of the Costantine family

The surname Costantine was first found in Devon and Cornwall where "Constantine, King of Devon and Cornwall in latter half of sixth century, after a wicked life, was 'converted to the Lord.' He then abandoned his throne and became a monk under S. Carthach at Rahin. King's County, Ireland. He afterwards crossed over to Scotland, founded the church of Govan, and suffered martyrdom in Kintyre, where there is a church, Kilchousland, named after him. In Angus he is vulgarly called Cousnan." [1]

Early History of the Costantine family

Outstanding amongst the family at this time was Walter de Constantiis, who was Vice Chancellor of England in 1173. George Constantine (b. 1501-1559), was a a Protestant reformer who was first brought up as a surgeon. "He received his education in the University of Cambridge, and was Bachelor of Canon Law in 1524. Adopting the reformed doctrines...
Another 55 words (4 lines of text) are included under the topic Early Costantine Notables in all our PDF Extended History products and printed products wherever possible.

Migration of the Costantine family to Ireland

Some of the Costantine family moved to Ireland, but this topic is not covered in this excerpt.
Another 84 words (6 lines of text) about their life in Ireland is included in all our PDF Extended History products and printed products wherever possible.

Migration of the Costantine family