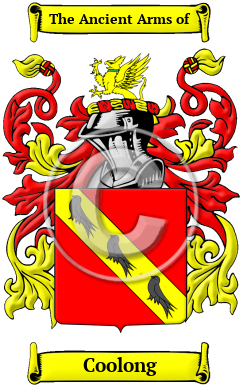 The name Coolong originated with the Anglo-Saxon tribes that once ruled Britain. It is derived from the personal name Nicholas. A common diminutive of the name Nicholas was Colin. [1]

Early Origins of the Coolong family

The surname Coolong was first found in various counties throughout old Britain. By example, the Hundreorum Rolls of 1273 list William de Colince or Colunce as holding lands at Chadlington, Oxford, and Hugh de Culunce had custody of Pont Orson temp. King John, c. 1200. Ernis de Coulonces married a daughter of William de Warrenne, Earl of Surrey, temp. Henry I. and Hugh de Colonches in 1165, held a barony of four fees. Adam de Coulnce paid a fine to the King in Oxfordshire 1203, and Hugh de Coulnce confirmed lands to Mottisfont Priory [2]

Early History of the Coolong family

One relatively recent invention that did much to standardize English spelling was the printing press. However, before its invention even the most literate people recorded their names according to sound rather than spelling. The spelling variations under which the name Coolong has appeared include Collins, Collin, Collings, Colling, Collis, Caullins, Caulling, Caullings, Caullis, Colins, Colings, Coliss and many more.

Distinguished members of the family include Samuel Collins (1576-1651), an English clergyman and academic, Regius Professor of Divinity at Cambridge and Provost of King's College, Cambridge; and his son, John Collins (1624-1711), an English academic and politician; Abraham Cowley (1618-1667), an English poet born in the City of London; John Collinges (1623-1690), an English Presbyterian theologian, participant in the Savoy Conference, ejected minister, and prolific writer; John Collins (1625-1683), an...
Another 70 words (5 lines of text) are included under the topic Early Coolong Notables in all our PDF Extended History products and printed products wherever possible.

Migration of the Coolong family to Ireland

Some of the Coolong family moved to Ireland, but this topic is not covered in this excerpt.
Another 72 words (5 lines of text) about their life in Ireland is included in all our PDF Extended History products and printed products wherever possible.

Migration of the Coolong family

At this time, the shores of the New World beckoned many English families that felt that the social climate in England was oppressive and lacked opportunity for change. Thousands left England at great expense in ships that were overcrowded and full of disease. A great portion of these settlers never survived the journey and even a greater number arrived sick, starving, and without a penny. The survivors, however, were often greeted with greater opportunity than they could have experienced back home. These English settlers made significant contributions to those colonies that would eventually become the United States and Canada. An examination of early immigration records and passenger ship lists revealed that people bearing the name Coolong arrived in North America very early: Alary Collin who settled in Philadelphia, Pa. in 1774; George Collin settled in Maryland in 1775; Patrick Collin settled in New Castle County, Del. in 1856.