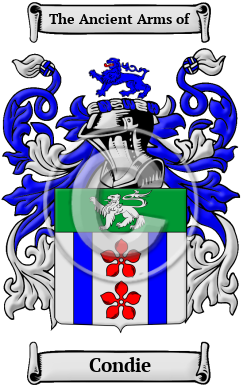 The name Condie is thought to be ultimately derived from Middle English, Old French word "conduit," which denoted a water channel. As a name it is assumed that the first bearer of the name lived near a canal of some kind.

Early Origins of the Condie family

The surname Condie was first found in Yorkshire where a Roger de Cundi was on record in circa 1150. The records of the Templars show Aliz de Condi in 1185 in Lincolnshire. The Pipe Rolls of 1200 for Lincolnshire show Nicholas Cundy. [3]

Early History of the Condie family

Another 46 words (3 lines of text) are included under the topic Early Condie Notables in all our PDF Extended History products and printed products wherever possible.

In the United States, the name Condie is the 15,556th most popular surname with an estimated 2,487 people with that name. [5]

Migration of the Condie family to Ireland

Some of the Condie family moved to Ireland, but this topic is not covered in this excerpt.
Another 60 words (4 lines of text) about their life in Ireland is included in all our PDF Extended History products and printed products wherever possible.

Condie migration to the United States +

Condie Settlers in United States in the 19th Century

Condie Settlers in Australia in the 19th Century

Historic Events for the Condie family +