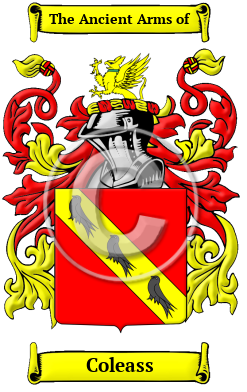 The generations and branches of the Coleass family share a name that has its roots in the ancient Anglo-Saxon culture of Britain. The name Coleass comes from the personal name Nicholas. A common diminutive of the name Nicholas was Colin. [1]

Early Origins of the Coleass family

The surname Coleass was first found in various counties throughout old Britain. By example, the Hundreorum Rolls of 1273 list William de Colince or Colunce as holding lands at Chadlington, Oxford, and Hugh de Culunce had custody of Pont Orson temp. King John, c. 1200. Ernis de Coulonces married a daughter of William de Warrenne, Earl of Surrey, temp. Henry I. and Hugh de Colonches in 1165, held a barony of four fees. Adam de Coulnce paid a fine to the King in Oxfordshire 1203, and Hugh de Coulnce confirmed lands to Mottisfont Priory [2]

Early History of the Coleass family

Until quite recently, the English language has lacked a definite system of spelling rules. Consequently, Anglo-Saxon surnames are characterized by a multitude of spelling variations. Changes in Anglo-Saxon names were influenced by the evolution of the English language, as it incorporated elements of French, Latin, and other languages. Although Medieval scribes and church officials recorded names as they sounded, so it is common to find one person referred to by several different spellings of his surname, even the most literate people varied the spelling of their own names. Variations of the name Coleass include Collins, Collin, Collings, Colling, Collis, Caullins, Caulling, Caullings, Caullis, Colins, Colings, Coliss and many more.

Distinguished members of the family include Samuel Collins (1576-1651), an English clergyman and academic, Regius Professor of Divinity at Cambridge and Provost of King's College, Cambridge; and his son, John Collins (1624-1711), an English academic and politician; Abraham Cowley (1618-1667), an English poet born in the City of London; John Collinges (1623-1690), an English Presbyterian theologian, participant in the Savoy Conference, ejected minister, and prolific writer; John Collins (1625-1683), an...
Another 70 words (5 lines of text) are included under the topic Early Coleass Notables in all our PDF Extended History products and printed products wherever possible.

Migration of the Coleass family to Ireland

Some of the Coleass family moved to Ireland, but this topic is not covered in this excerpt.
Another 72 words (5 lines of text) about their life in Ireland is included in all our PDF Extended History products and printed products wherever possible.

Migration of the Coleass family

Searching for a better life, many English families migrated to British colonies. Unfortunately, the majority of them traveled under extremely harsh conditions: overcrowding on the ships caused the majority of the immigrants to arrive diseased, famished, and destitute from the long journey across the ocean. For those families that arrived safely, modest prosperity was attainable, and many went on to make invaluable contributions to the development of the cultures of the new colonies. Research into the origins of individual families in North America revealed records of the immigration of a number of people bearing the name Coleass or a variant listed above: Alary Collin who settled in Philadelphia, Pa. in 1774; George Collin settled in Maryland in 1775; Patrick Collin settled in New Castle County, Del. in 1856.