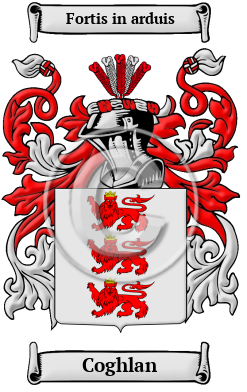 The name Coghlan has undergone many variations in the time that has passed since its genesis. In Gaelic it appeared as Mac Cochlain or O Cochlain.

Early Origins of the Coghlan family

The surname Coghlan was first found in Munster where Dealbha, brother of King Blad of Munster, is the traditional ancestor of this family. There were two different septs which have become known as Coughlan: the MacCoughlans, who dwelled in the barony of Garrycastle in Offaly, and the O'Coughlans, who lived in the baronies of Carbery and Ballymore in Cork. In Cork, they occupied the territories known as the baronies of Carbery and Ballymore. The MacCoughlans were the more important of the two septs until they dissolved and scattered during the 18th century. They were a Dalcassian sept, and their chief was referred to as Chief of Delvin MacCoughlan. In 1858, they were still recorded as landlords at Cloghan, near Banagher, but they vanished within fifty years. However, the O'Coughlans, who were recorded in large numbers at the time of the 1659 census, still continue to be numerous in those territories. This census shows the prefix O to have been largely discarded by that time. The MacCoghlans lost most of their extensive territories during the Anglo Norman invasion of Ireland by Strongbow in 1172, and lost even more during the Cromwellian Invasion in 1641.

Early History of the Coghlan family

This web page shows only a small excerpt of our Coghlan research. Another 77 words (6 lines of text) covering the years 159 and 1590 are included under the topic Early Coghlan History in all our PDF Extended History products and printed products wherever possible.

During the Middle Ages, exact spellings for people's name did not exist. It was up to the literate scribe that was recording a person's name to decide how to spell his name. Names, therefore, often had many spelling variations. The variations of the name Coghlan include: Coghlan, Coughlan, MacCoughlan, McCoughlan, Coglan, Couglan, Coughlin and many more.

More information is included under the topic Early Coghlan Notables in all our PDF Extended History products and printed products wherever possible.

Coghlan migration to the United States +

A great wave of Irish migration occurred during the 19th century as a direct result of English colonial rule and tight-fisted absentee landlords. Many of these Irish immigrants boarded passenger ships bound for North America. Those who migrated early enough were given land in either British North America or the United States; those who came in the late 19th century were typically employed in industrial centers as laborers. At whatever age they undertook the dangerous passage to North America, those Irish immigrants were essential to the speedy development of the two infant nations to which they arrived, whether they broke and settled land, helped build canals, bridges, and railroads, or produced products for consumer consumption. An examination of immigration and passenger lists has uncovered a large number of immigrants bearing the name Coghlan or one of its variants:

Coghlan Settlers in United States in the 17th Century

Coghlan Settlers in United States in the 18th Century

Coghlan Settlers in United States in the 19th Century

Coghlan Settlers in Canada in the 19th Century

Coghlan Settlers in Australia in the 19th Century

Coghlan Settlers in New Zealand in the 19th Century