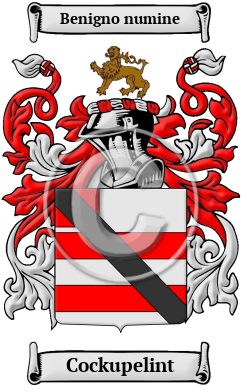 Early Origins of the Cockupelint family

The surname Cockupelint was first found in Lancashire at Whittington. "This is the Witetvne of the Saxon era, and was anciently of considerable extent. William de Coucy in the 14th of Edward III. had a grant of free warren here; and in the 49th of the same reign, Sir John de Coupeland, successor of de Coucy, owned a third of the manor: the manor was therefore held in portions, but when they were united does not appear." [1]

Early History of the Cockupelint family

Notable amongst the family name during their early history was Robert Copland ( fl. 1508-1547), English printer and author, thought to have been a servant of William Caxton, and worked for Wynkyn de Worde, best known...
Another 35 words (2 lines of text) are included under the topic Early Cockupelint Notables in all our PDF Extended History products and printed products wherever possible.

Migration of the Cockupelint family to Ireland

Some of the Cockupelint family moved to Ireland, but this topic is not covered in this excerpt.
Another 59 words (4 lines of text) about their life in Ireland is included in all our PDF Extended History products and printed products wherever possible.

Migration of the Cockupelint family