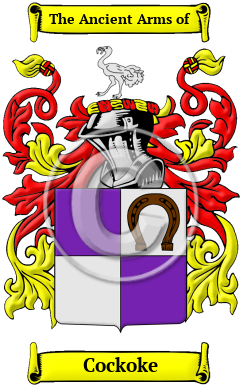 The name Cockoke is from the ancient Anglo-Saxon tribes of Britain. The name was given to a person who was a cook, a seller of cooked meats, or a keeper of an eating-house. The surname Cockoke is derived from the Old English word coc, which means cook. [1] [2]

Early Origins of the Cockoke family

The surname Cockoke was first found in Essex where the first found record the name was Aelfsige Coc (c.950) who is recorded in an early reference of Anglo Saxon Wills, [3] more than one hundred years before the Norman Conquest and the arrival of Duke William at Hastings in 1066.

The Hundredorum Rolls of 1273 listed John Cocus in Norfolk, Alexander Cocus in Yorkshire, Emma Coca in Cambridgeshire and Matthew Cocus in Oxfordshire. [2]

Ireby in Lancashire was home to another branch of the family. "This place is written 'Irebi' in the Domesday Survey, and then comprehended three carucates of land. In the reign of James I., lived Thomas Cooke de Irebye. The family of Cooke were the former possessors of the Hall, sometimes called Fothergill Hall, and sometimes Nether Hall." [4]

Early History of the Cockoke family

Sound was what guided spelling in the essentially pre-literate Middle Ages, so one person's name was often recorded under several variations during a single lifetime. Also, before the advent of the printing press and the first dictionaries, the English language was not standardized. Therefore, spelling variations were common, even among the names of the most literate people. Known variations of the Cockoke family name include Cooke, Cook, Cocus and others.

Notables of this surname at this time include: John Cooke (or John Cook, John Coke, 1608-1660), the first Solicitor General of the English Commonwealth and led the prosecution of Charles I; Francis Cooke (1583-1663), one of the 102 passengers on the Mayflower; Captain Henry Cooke (c.1616-1672), an English composer, actor and singer, Gentleman of the Chapel Royal and joined the Royalist cause, Master of the Children of the Chapel Royal (1660-1672); Sir William Cooke of Highnam; his son, Sir Robert Cooke (c. 1598-1643), an English politician Member of Parliament for Gloucestershire (1640) and Tewkesbury (1641-1643); his son, Edward Cooke (died 1683)...
Another 143 words (10 lines of text) are included under the topic Early Cockoke Notables in all our PDF Extended History products and printed products wherever possible.

Migration of the Cockoke family to Ireland

Some of the Cockoke family moved to Ireland, but this topic is not covered in this excerpt.
Another 99 words (7 lines of text) about their life in Ireland is included in all our PDF Extended History products and printed products wherever possible.

Migration of the Cockoke family

For political, religious, and economic reasons, thousands of English families boarded ships for Ireland, the Canadas, the America colonies, and many of smaller tropical colonies in the hope of finding better lives abroad. Although the passage on the cramped, dank ships caused many to arrive in the New World diseased and starving, those families that survived the trip often went on to make valuable contributions to those new societies to which they arrived. Investigation of the origins of family names on the North American continent has revealed that early immigrants bearing the name Cockoke or a variant listed above: Chas Cook who settled in Nova Scotia in 1749 with his wife, son and daughter; Christn Cook who settled in Nova Scotia with his wife, son, 2 daughters and servant in 1749.