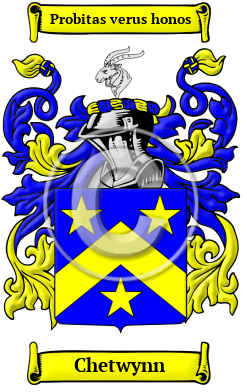 The name Chetwynn is an old Anglo-Saxon name. It comes from when a family lived in Salop (now Shropshire) where they derived their family name from the parish of Chetwynde. The place-name is derived from the Old English compound word which means "dweller at the winding ascent." [1]

Early Origins of the Chetwynn family

The surname Chetwynn was first found in Shropshire at Chetwynd, a rural civil parish just to the north of Newport. [2] [3] The original Chetwynd manor dates back to Saxon times and was held by Leofric, Earl of Mercia, about 1050.

While there is no doubt of the family's Saxon heritage, we must consider the Norman Chetwynd or De Verlai, from Verlai, Normandy. "In 1086, Turold de Verlai held thirteen lordships in Salop from Earl Roger, of which Chetwynd appears to have been the chief. Robert his son was a Baron temp. Henry I., and before 1121 witnessed a charter in favour of Salop Abbey. He was living 1141, and was father of Robert de Verlai, who, with his father, gave Verlai Church, Normandy, to Essay Abbey, which grant was confirmed by Henry II. (not Henry I. as erroneously stated in Gallia Christiana, xi. 234, Instr.). The next in descent was Adam de Chetwynd, 1180-1203; and in his time the barony, consisting of two knights' fees, was placed by the Crown under the feudal suzerainty of the Fitz-Alans" [4]

The Hundredorum Rolls of 1273 included: Adam de Chetewynde, Salop (Shropshire); and John de Chetewind, Salop. [2] And this noted author goes on to note that "the following entries practically prove that Chatwin is a variant of Chetwynd: Thomas Chetwen, or Chetwyn, 1511: Register of the University of Oxford; and Edward Chetwind, or 'Chetwine,' 1596. [2]

A search through other early rolls proved to be fruitful: Richard de Chetewynde was listed in the Assize Rolls for Staffordshire in 1268; William de Chetwynde was found in the Feet of Fines for Warwickshire in 1343; and William Chetwyn, Chetwynd was listed in Yorkshire in 1415. [5]

Early History of the Chetwynn family

Before the last few hundred years, the English language had no fast system of spelling rules. For that reason, spelling variations are commonly found in early Anglo-Saxon surnames. Over the years, many variations of the name Chetwynn were recorded, including Chetwynd, Chetwyn, Chetwynde, Chetwin, Chitwyn and others.

Notables of the family at this time include Walter Chetwynd (died 1638), an English politician, Member of Parliament for Newcastle under Lyme (1584-1586); Walter Chetwynd FRS (1633-1693), of Ingestre Hall, an English antiquary and politician; and John Chetwynd (1643-1702), an English politician from Rudge, Shropshire, Member of Parliament for Stafford from 1689 to 1695, and again in 1701 and 1702...
Another 59 words (4 lines of text) are included under the topic Early Chetwynn Notables in all our PDF Extended History products and printed products wherever possible.

Migration of the Chetwynn family

To escape oppression and starvation at that time, many English families left for the "open frontiers" of the New World with all its perceived opportunities. In droves people migrated to the many British colonies, those in North America in particular, paying high rates for passages in cramped, unsafe ships. Although many of the settlers did not make the long passage alive, those who did see the shores of North America perceived great opportunities before them. Many of the families that came from England went on to make essential contributions to the emerging nations of Canada and the United States. Research into various historical records revealed some of first members of the Chetwynn family emigrate to North America: Thomas Chetwin who settled in Jamaica in 1684.