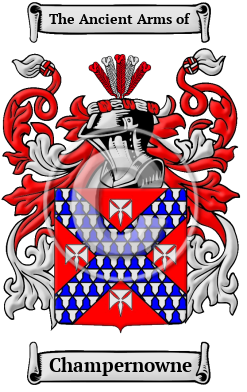 The birthplace of the surname Champernowne is Cornwall, a rugged peninsula in southwestern England that is noted for its strong Gaelic traditions. Though surnames became common during medieval times, English people were formerly known only by a single name. The way in which hereditary surnames were adopted in medieval England is fascinating. Under the Feudal System of government, surnames evolved and they often reflected life on the manor and in the field. Despite the fact that occupational surnames are rare among the Cornish People, they nevertheless sometimes adopted surnames derived from the type of work they did. The surname Champernowne was an occupational name for a person in charge of the household of a nobleman. Interestingly, the name Champernowne was originally derived from the title chamberlain, a word that originated as a name for the person in charge of a nobleman's sleeping quarters, and later came to encompass the role of running the household business.

Early Origins of the Champernowne family

The surname Champernowne was first found in Devon at Modbury, a market-town and parish, in the union of Kingsbridge, hundred of Ermington. "This place, called in Latin records Motberia, was in the possession of Wado in the time of the Confessor, and subsequently became the property of the Champernownes, of whom Richard Champernowne, in 1334, obtained permission to fortify his manorial residence here." [2]

Early History of the Champernowne family

This web page shows only a small excerpt of our Champernowne research. Another 90 words (6 lines of text) covering the years 1280 and 1300 are included under the topic Early Champernowne History in all our PDF Extended History products and printed products wherever possible.

More information is included under the topic Early Champernowne Notables in all our PDF Extended History products and printed products wherever possible.

Champernowne migration to the United States +

Early North American records indicate many people bearing the name Champernowne were among those contributors:

Champernowne Settlers in United States in the 17th Century