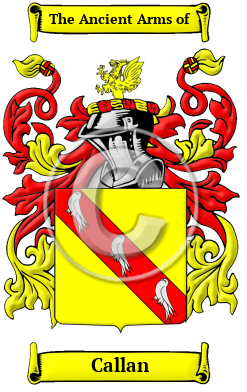 The name Callan comes from the Irish Gaelic O Cathalain. The Gaelic versions of today's Irish names demonstrate a link to a proud, ancient past. The name is possibly derived from Cathalan, king of Farney slain in 1028, whose name means Little Charles, and from whom the family is thought to have descended. Cathalan was in turn descended from Coleman Mor, the king of Meath and (the 133rd Monarch of Ireland).

Early Origins of the Callan family

The surname Callan was first found in County Roscommon (Irish: Ros Comáin) located in central Ireland in the province of Connacht, where they held a family seat from very ancient times.

Caillin ( fl. 560), was an Irish saint, "son of Niata, descended from Rudraighe, whose grandson, Fergus Mac Roigh, flourished at the beginning of the Christian era. His mother was Deighe, granddaughter of Dubhthach, chief poet of King Laogaire in the time of St. Patrick. The authority for the history of St. Caillin is the ancient ‘Book of Fenagh,’ a series of poetical rhapsodies, written about 1400, a copy of which with a connecting narrative in prose was made in 1516. we may gather the following facts of St. Caillin's history from this curious repertory of ancient traditions: ‘The descendants of Medbh and Fergus, viz. the children of Conmac, Ciar, and Corc, grew and multiplied throughout Ireland. The children of Conmac especially were in Connaught.’ Those were the Conmaicne of Dunmor, kinsmen of Caillin's. Resolved to remedy the congestion of the population by killing each other, the Conmaicne would no doubt have carried out their plan but for the interference of St. Caillin. By the advice of an angel they sent messengers to him at Rome, whither he had gone for his education." [1]

Early History of the Callan family

This web page shows only a small excerpt of our Callan research. Another 149 words (11 lines of text) covering the years 1027 and 1280 are included under the topic Early Callan History in all our PDF Extended History products and printed products wherever possible.

More information is included under the topic Early Callan Notables in all our PDF Extended History products and printed products wherever possible.

In the United States, the name Callan is the 7,853rd most popular surname with an estimated 2,487 people with that name. [2]

Callan migration to the United States +

Thousands of Irish families left for North American shores in the 19th century. These people were searching for a life unencumbered with poverty, hunger, and racial discrimination. Many arrived to eventually find such conditions, but many others simply did not arrive: victims of the diseased, overcrowded ships in which they traveled to the New World. Those who lived to see North American shores were instrumental in the development of the growing nations of Canada and the United States. A thorough examination of passenger and immigration lists has disclosed evidence of many early immigrants of the name Callan:

Callan Settlers in United States in the 17th Century

Callan Settlers in United States in the 18th Century

Callan Settlers in United States in the 19th Century

Callan Settlers in Canada in the 19th Century

Callan Settlers in Australia in the 19th Century

Callan Settlers in New Zealand in the 19th Century

Historic Events for the Callan family +

Suggested Readings for the name Callan +