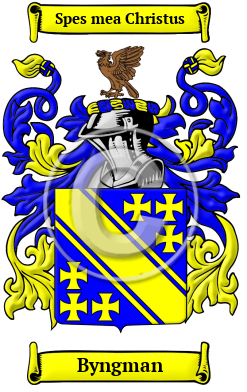 The name Byngman was brought to England in the great wave of migration following the Norman Conquest of 1066. The Byngman family lived at Bingham in the county of Nottinghamshire. The name of that place is derived from the Old Norse word bingr, meaning stall or manger, and the Old English word ham, meaning settlement or village. Another reference claims the family descended from "De Buisli, from Buisli or Builly, near Neûchatel, Normandy (often supposed to be of Saxon origin.)" [1] The same reference claims "Roger de Busliaco held 149 lordships in barony 1086, chiefly in York [Yorkshire] and Notts [Nottinghamshire], which were entitled the Honour of Tickhill. He also held Sutton, Somerset, from Roger de Arundel. One of his lordships was Bingham, Notts, and estate of great value and importance." [1] Whichever origin the reader chooses, there is no doubt that Norfolk was the stronghold of the family since ancient times.

Early Origins of the Byngman family

The surname Byngman was first found in Nottinghamshire at Bingham, a market town in the Rushcliffe borough that has existed since at least the Domesday Book where it was listed as Bingheham [2] which probably meant "homestead of the family or followers of a man called Bynna" from the Old English personal name + ham. [3] "This place was possessed previously to the Conquest by two Saxon chieftains, and appears to have been anciently more extensive than at present: it had a college, or guild, in honour of St. Mary. " [4]

One of the first records of the family was Simon Binham or Bynham ( fl. 1335), English chronicler, a monk of the priory of Binham, Norfolk, one of the cells belonging to the abbey of St. Albans. [5]

A few years later, William Binham or Bynham (fl. 1370), the English theologian, was a native of Binham in Norfolk, where there was a Benedictine priory dependent on the abbey of St. Albans. [5] One may presume that the above two people were related as they both came from the same priory, but there is no written proof.

Early History of the Byngman family

Norman surnames are characterized by a multitude of spelling variations. The frequent changes in surnames are largely due to the fact that the Old and Middle English languages lacked definite spelling rules. The introduction of Norman French to England, as well as the official court languages of Latin and French, also had pronounced influences on the spelling of surnames. Since medieval scribes and church officials recorded names as they sounded, rather than adhering to any specific spelling rules, it was common to find the same individual referred to with different spellings. The name has been spelled Bingham, Binham, Bingam, Binghame and others.

Outstanding amongst the family at this time was Sir Richard Bingham or Byngham (1528-1599), English Governor of Connaught, the third son of Richard Bingham, of Melcombe-Bingham, Dorsetshire. "In 1584, Bingham was appointed Governor of Connaught, and knighted at Dublin Castle by Lord-Deputy Perrot on 12 July. " [5] John Bingham (1607-1689), was an English divine, born at Derby, and as he was in his eighty-second year when he died in 1689...
Another 70 words (5 lines of text) are included under the topic Early Byngman Notables in all our PDF Extended History products and printed products wherever possible.

Migration of the Byngman family to Ireland

Some of the Byngman family moved to Ireland, but this topic is not covered in this excerpt.
Another 148 words (11 lines of text) about their life in Ireland is included in all our PDF Extended History products and printed products wherever possible.

Migration of the Byngman family

Many English families emigrated to North American colonies in order to escape the political chaos in Britain at this time. Unfortunately, many English families made the trip to the New World under extremely harsh conditions. Overcrowding on the ships caused the majority of the immigrants to arrive diseased, famished, and destitute from the long journey across the stormy Atlantic. Despite these hardships, many of the families prospered and went on to make invaluable contributions to the development of the cultures of the United States and Canada. Early North American immigration records have revealed a number of people bearing the name Byngman or a variant listed above: Thomas Bingham who settled in Boston Massachusetts in 1673; William Bingham settled in Barbados in 1635; and John Bingham settled in Virginia in 1653..