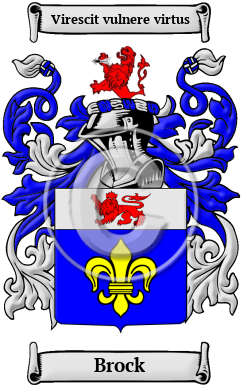 Today's generation of the Brock family bears a name that was brought to England by the migration wave that was started by the Norman Conquest of 1066. The Brock family lived in Essex. The name, however, derives from the family's former residence in Broc, in the area of Anjou, France. [1] Alternatively, the name could have been from the Saxon Broc, meaning a badger. "Broch, in Gaelic or Irish, Cornish-British and Welsh, all have the same meaning." [2]

Early Origins of the Brock family

The surname Brock was first found in Essex where Ralph Broc was granted lands in Colchester in 1119, and it is thought he was invited to England to support the need for industrialists and trades people. [3]

However, some of the family claim Great Oakley, Northampton as their ancient homestead. "Oakley Hall, the seat of Sir Arthur de Capell Broke, Bart., is a picturesque specimen of an old English manor-house. Sir Arthur is lord of the manor, and possesses a right of free warren, granted shortly after the Conquest. The collection of family deeds is one of the finest and most curious in the kingdom, and in beautiful preservation; the dates of some of them are not much later than William I.'s reign. " [4]

Much further to the north in Scotland, there is a Brock in East Renfrewshire and one of the first records there was Henry Brok who had provision of a canonry and prebend of Dunkeld in 1328. [8]

Early History of the Brock family

Before English spelling was standardized a few hundred years ago, spelling variations of names were a common occurrence. Elements of Latin, Norman French and other languages became incorporated into English throughout the Middle Ages, and name spellings changed even among the literate. The variations of the surname Brock include Broc, Brock, Brocke, Brockes, Brocks, Brock, Brockx, Broch and many more.

Outstanding amongst the family at this time was Marianus Brockie, D.D. (1687-1755), a Scottish Benedictine monk. He was "born at Edinburgh on 2 Dec. 1687, and joined the Scotch Benedictines at Ratisbon in 1708. He was doctor...
Another 37 words (3 lines of text) are included under the topic Early Brock Notables in all our PDF Extended History products and printed products wherever possible.

In the United States, the name Brock is the 451st most popular surname with an estimated 62,175 people with that name. [9]

Migration of the Brock family to Ireland

Some of the Brock family moved to Ireland, but this topic is not covered in this excerpt. More information about their life in Ireland is included in all our PDF Extended History products and printed products wherever possible.

Brock migration to the United States +

In England at this time, the uncertainty of the political and religious environment of the time caused many families to board ships for distant British colonies in the hopes of finding land and opportunity, and escaping persecution. The voyages were expensive, crowded, and difficult, though, and many arrived in North America sick, starved, and destitute. Those who did make it, however, were greeted with greater opportunities and freedoms that they could have experienced at home. Many of those families went on to make important contributions to the young nations in which they settled. Early immigration records have shown some of the first Brocks to arrive on North American shores:

Brock Settlers in United States in the 17th Century

Brock Settlers in United States in the 18th Century

Brock Settlers in United States in the 19th Century

Brock Settlers in United States in the 20th Century

Brock Settlers in Canada in the 17th Century

Brock Settlers in Canada in the 19th Century

Brock Settlers in Australia in the 19th Century

Brock Settlers in New Zealand in the 19th Century

The British first settled the British West Indies around 1604. They made many attempts but failed in some to establish settlements on the Islands including Saint Lucia and Grenada. By 1627 they had managed to establish settlements on St. Kitts (St. Christopher) and Barbados, but by 1641 the Spanish had moved in and destroyed some of these including those at Providence Island. The British continued to expand the settlements including setting the First Federation in the British West Indies by 1674; some of the islands include Barbados, Bermuda, Cayman Island, Turks and Caicos, Jamaica and Belize then known as British Honduras. By the 1960's many of the islands became independent after the West Indies Federation which existed from 1958 to 1962 failed due to internal political conflicts. After this a number of Eastern Caribbean islands formed a free association. [22]

Brock Settlers in West Indies in the 17th Century

Historic Events for the Brock family +

Suggested Readings for the name Brock +