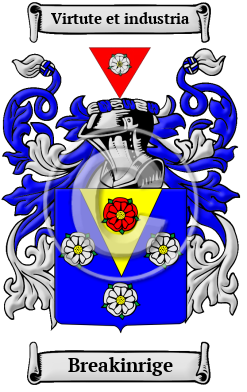 The rugged west coast of Scotland in the kingdom of Dalriada is the setting from which came the Breakinrige name. The name derives from someone having lived in the places named Brackenrig, in Lanarkshire and Ayrshire. [1] This place name comes from the Northern Old English words, bracken and rigg (ridge). So, Breakinrige literally means "dweller by the bracken-covered bridge." [2] Bracken is a large fern which typically grows in moorland and is found on all continents except Antarctica and in all environments except deserts.

Early Origins of the Breakinrige family

The surname Breakinrige was first found in Lanarkshire, and Ayrshire where they held a family seat from very ancient times. In 1454, two records were found of the family: the yard of John of Bracanyyggis in Glasgow; and Johannes Brakanryg was sergeant of the upper baronie of Renffrew. A few years later, Robart Brakenrig witnessed a letter of reversion in 1504. [1]

While the Breakinrige family typically claim Scotland as their homeland, as one would expect northern England is also a place the family calls home. Cumbria (Cumberland) just south of the Scottish border included a listing of Nicholas de Bracanrig in the Subsidy Rolls for 1332. "There are five places named Brackenrigg in Cumberland and one in Lanarkshire [Scotland]. " [2]

Early History of the Breakinrige family

This web page shows only a small excerpt of our Breakinrige research. Another 108 words (8 lines of text) covering the years 1454, 1454, 1748 and 1816 are included under the topic Early Breakinrige History in all our PDF Extended History products and printed products wherever possible.

More information is included under the topic Early Breakinrige Notables in all our PDF Extended History products and printed products wherever possible.

Migration of the Breakinrige family to Ireland

Some of the Breakinrige family moved to Ireland, but this topic is not covered in this excerpt.
Another 38 words (3 lines of text) about their life in Ireland is included in all our PDF Extended History products and printed products wherever possible.

Migration of the Breakinrige family

Numerous Scottish settlers settled along the east coast of the colonies that would become the United States and Canada. Others traveled to the open country of the west. At the time of the American War of Independence, some remained in the United States, while those who remained loyal to the crown went north to Canada as United Empire Loyalists. The highland games and Clan societies that sprang up across North America in the 20th century have helped many Scots to recover parts of their lost traditions. Research into passenger and immigration lists has revealed some of the very first Breakinriges to arrive in North America: Alexander Brackenridge who settled in Virginia in 1740; Hugh and John arrived in Philadelphia in 1846; Andrew Brackinridge settled in Philadelphia in 1840.