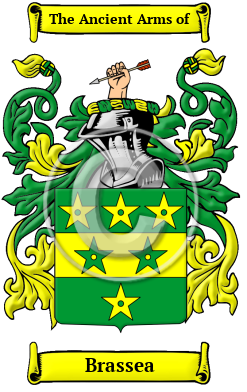 The ancestors of the bearers of the Brassea family name are thought have lived in ancient Anglo-Saxon England. They were first found in Cheshire. The name, however, refers to the family's residence in the town of Brecy in the Caen region of France prior their emigration at the time of the Norman Conquest of 1066. [1]

Early Origins of the Brassea family

The surname Brassea was first found in Cheshire, where they held a family seat after the Norman Conquest in the 11th century. The name was originally associated with the town of Brecy in the Caen region of France.

"The Cheshire family had many branches, from one of which descend the Brasseys now existing, and Brassey the eminent engineer." [2]

A family of Brescy, derived from the Sieur de Bracy, of Battle Abbey, was connected with the county of Chester in very early times. The oldest document discovered relative to Wistanston in Cheshire, is a deed, without date, "of William Malbank, Baron of Nantwich, in which he gives notice that he has received of Robert de Bracy, his black nephew, ye homage and service of three Kts. fees - viz: for Wistanaton, &c." [3]

Another noted source provides similar details along the same theme: "Robert de Breze and M. de Brece were among the one hundred and nineteen Norman gentlemen who defended Mont St. Michel, against the English in 1423; and three noble families of the name existed in the Duchy. It dates from the Conquest in England. William, son of Radulphus de Braceio (who occurs in a Norman charter of 1080), held Wistaton in Cheshire of the Barony of Nantwich; and the first mesne-lords of the manor, who bore its name, and continued till the time of Henry VI., are conjectured to have been the elder male branch of his descendants." [1]

Brace's Leigh, in Worcestershire, bears the name of another branch of the family, that can, with every probability, be traced back to the Domesday owner. "Warmedon and Eston were then held of the Bishop's manor of Norwiche by Urso d'Abitot and by Robert of him" (here follows a description of the property): "to which agreeth the book of tenures, temp. Ed. I., where Robert de Bracy held in Warmedon of William de Beauchamp" (who inherited Urso's domains). "Robert de Bracy 20 Ed. III., held in Warmedon the same land that Robert his ancestor had. In the Rotuli Hundredorum of 1272 I find entered Richard and Elias de Bracy, both of Oxfordshire; and William de Bracy, with his daughters Avicia and Joanna, of Kent. [1]

Further to the north in Scotland, Bressay, Burra, and Quarff is a parish in the county of Orkney and Shetland. "The island of Bressay, which is nearly six miles long, and varies in breadth from two to three miles." [4]

Early History of the Brassea family

Until quite recently, the English language has lacked a definite system of spelling rules. Consequently, Anglo-Saxon surnames are characterized by a multitude of spelling variations. Changes in Anglo-Saxon names were influenced by the evolution of the English language, as it incorporated elements of French, Latin, and other languages. Although Medieval scribes and church officials recorded names as they sounded, so it is common to find one person referred to by several different spellings of his surname, even the most literate people varied the spelling of their own names. Variations of the name Brassea include Brassey, Brassy, Brecy, Braceio, Bresci, Braci, Bracy, Brassye and many more.

More information is included under the topic Early Brassea Notables in all our PDF Extended History products and printed products wherever possible.

Migration of the Brassea family

Searching for a better life, many English families migrated to British colonies. Unfortunately, the majority of them traveled under extremely harsh conditions: overcrowding on the ships caused the majority of the immigrants to arrive diseased, famished, and destitute from the long journey across the ocean. For those families that arrived safely, modest prosperity was attainable, and many went on to make invaluable contributions to the development of the cultures of the new colonies. Research into the origins of individual families in North America revealed records of the immigration of a number of people bearing the name Brassea or a variant listed above: Thomas Brassey who arrived in Delaware in 1682.