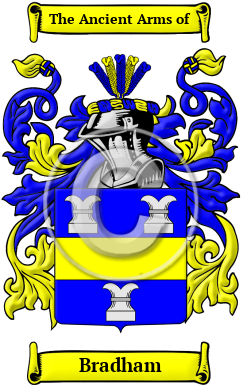 The name Bradham is rooted in the ancient Anglo-Saxon culture. It was originally a name for someone who worked as a maker of ropes or cords.

Early Origins of the Bradham family

The surname Bradham was first found in Norfolk, at Bradenham, a village and civil parish that dates back to before the Domesday Book where it was listed with the same spelling. [1] The place name literally means "broad homestead or enclosure" derived from the Old English words "brad" + "ham". [2]

The first record of the family was found here in the Pipe Rolls of 1177 when Suift de Bradenham was recorded as holding lands at that time. [3]

Bradenham is also a village and civil parish in Buckinghamshire, near Saunderton. This village also dates back to the Domesday Book [6] where it was listed as Bradeham. Bradenham Manor is a grand red brick manor house that dates back to the 13th century when it belonged to the Earl of Warwick.

Bradnam Wood is a 12.5-hectare (31-acre) Local Nature Reserve west of Maidenhead in Berkshire and is managed by The Woodland Trust.

Early History of the Bradham family

It is only in the last few hundred years that the English language has been standardized. For that reason, early Anglo-Saxon surnames like Bradham are characterized by many spelling variations. As the English language changed and incorporated elements of other European languages, even literate people changed the spelling of their names. The variations of the name Bradham include Bradnam, Bradenham, Bradinham, Bradinam, Bradnem and others.

Notables of this surname at this time include: Suift de Bradenham, a prominent 12th century landholder in Norfolk; and Matthew Brettingham (1699- 1769), known as Matthew Brettingham the Elder, an 18th-century Englishman who rose from humble origins to supervise the construction of Holkham Hall, Norfolk and eventually became one of the country's better-known architects. [7] His...
Another 55 words (4 lines of text) are included under the topic Early Bradham Notables in all our PDF Extended History products and printed products wherever possible.

In the United States, the name Bradham is the 14,396th most popular surname with an estimated 2,487 people with that name. [8]

Bradham migration to the United States +

Many English families tired of political and religious strife left Britain for the new colonies in North America. Although the trip itself offered no relief - conditions on the ships were extremely cramped, and many travelers arrived diseased, starving, and destitute - these immigrants believed the opportunities that awaited them were worth the risks. Once in the colonies, many of the families did indeed prosper and, in turn, made significant contributions to the culture and economies of the growing colonies. An inquiry into the early roots of North American families has revealed a number of immigrants bearing the name Bradham or a variant listed above:

Bradham Settlers in United States in the 17th Century

Bradham Settlers in United States in the 18th Century