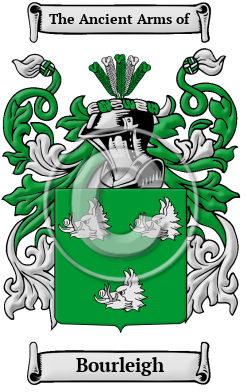 The ancestors of the name Bourleigh date back to the Anglo-Saxon tribes of Britain. The name is derived from when the Bourleigh family lived in the fort by the wood having derived from the Old English burhleah. [1]

Early Origins of the Bourleigh family

The surname Bourleigh was first found in Somerset where Burley Castle where a motte and bailey castle of the late 11th or early 12th century remains to this day. The village and civil parish Burley, or Burley-on-the-Hill, is located two miles north-east of Oakham in Rutland. Burleigh Castle is located near the village of Milnathort, in Perth and Kinross, Scotland and dates from the 15th and 16th centuries. It was held by the Balfours from 1446. Burleigh is also a village in Berkshire, England, within the civil parish of Warfield.

Early History of the Bourleigh family

It is only in the last few hundred years that the English language has been standardized. For that reason, early Anglo-Saxon surnames like Bourleigh are characterized by many spelling variations. As the English language changed and incorporated elements of other European languages, even literate people changed the spelling of their names. The variations of the name Bourleigh include: Burley, Burleigh, Burlie, Burrley, Burrlie, Burrleigh, Burly, Bourley, Bourleigh, Bourly, Berly and many more.

Distinguished members of the family include William Burley, Speaker of the House of Commons of England in March 1437; and John Burley, Sheriff of county Salop in 1409. Sir Simon de Burley (ca.1336-1388), was Lord Warden of the Cinque Ports and Constable of...
Another 42 words (3 lines of text) are included under the topic Early Bourleigh Notables in all our PDF Extended History products and printed products wherever possible.

Migration of the Bourleigh family to Ireland

Some of the Bourleigh family moved to Ireland, but this topic is not covered in this excerpt.
Another 46 words (3 lines of text) about their life in Ireland is included in all our PDF Extended History products and printed products wherever possible.

Migration of the Bourleigh family

Many English families tired of political and religious strife left Britain for the new colonies in North America. Although the trip itself offered no relief - conditions on the ships were extremely cramped, and many travelers arrived diseased, starving, and destitute - these immigrants believed the opportunities that awaited them were worth the risks. Once in the colonies, many of the families did indeed prosper and, in turn, made significant contributions to the culture and economies of the growing colonies. An inquiry into the early roots of North American families has revealed a number of immigrants bearing the name Bourleigh or a variant listed above: Abell Burleigh who settled in Virginia in 1652; followed by William in 1729; George William Burleigh, who settled in New York State early in the seventeenth century.