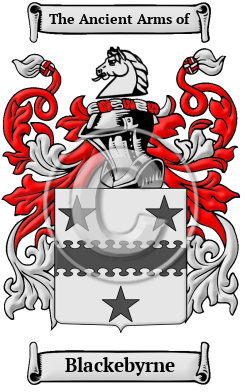 Blackebyrne is a name of ancient Anglo-Saxon origin and comes from the family once having lived in the town of Blackburn in the county of Lancashire. This place-name is derived from the Old English word burn, meaning stream, and referred to a stream in a dark area, or where the water was muddy. [1]

Early Origins of the Blackebyrne family

The surname Blackebyrne was first found in Lancashire at Blackburn, a parish, and the head of a union, in the Lower division of the hundred of Blackburn. "This place takes its name from a small rivulet near the town, which, from the turbid state of the water, was anciently called Blakeburn, or "the yellow bourne." A castle is said to have been built here, probably by the Romans, which, after their departure from the island, was occupied successively by the Britons and the Saxons; but there are no vestiges of it, nor can even its site be distinctly ascertained. Blackburn was formerly the capital of a district called Blackburnshire." [2]

The earliest record of the family was Henry de Blackeburn who was listed in the Curia Regis Rolls of 1206. [3]

Early records of one branch of the family were found in Garston, Lancashire. "Robert de Blackburn held Garston for nearly forty years, dying about the year 1354; his wife Ellen is mentioned in 1332. He acquired various portions of land from the minor owners. Robert de Blackburn was succeeded by his eldest son John, who even before his father's death seems to have taken an active part in managing the estate. (fn. 35) He was lord of the manor for about fifty years, dying on 8 January, 1404-5, and during this long period seems to have been constantly acquiring fresh portions of land." [4]

Further to the north in Scotland, the name was derived from "one or other of several small places so named. Willelmus de Blakeburne was witness in 1243 to the ratification of the gift of the church of Lescelyn to Lundors. Robert de Blakeburne of Berwickshire rendered homage in 1296 [to King Edward I of England]. William de Blakburne appears as Abbot of Cambuskenneth, 1394. [6]

Early History of the Blackebyrne family

Sound was what guided spelling in the essentially pre-literate Middle Ages, so one person's name was often recorded under several variations during a single lifetime. Also, before the advent of the printing press and the first dictionaries, the English language was not standardized. Therefore, spelling variations were common, even among the names of the most literate people. Known variations of the Blackebyrne family name include Blackburn, Blackbyrn, Blackbirn, Blackburne, Blackborn, Blagburn, Blackbyrne and many more.

Distinguished members of the family include Lancelot Blackburne (sometimes Blackburn or Blackbourne), (1658-1743), an English clergyman, who became Archbishop of York, and some believe to have been a pirate. He was the son of Richard Blackburne of London, whom the archbishop claimed to have been connected with the Blackburnes of Marricke Abbey. "Archbishop Blackburne was gay and witty. His enemies repeated the story that he acted as chaplain on board one of the ships engaged in buccaneering, and that he shared the booty, the joke running that one of the buccaneers on his arrival in England asked what had become of...
Another 100 words (7 lines of text) are included under the topic Early Blackebyrne Notables in all our PDF Extended History products and printed products wherever possible.

Migration of the Blackebyrne family

For political, religious, and economic reasons, thousands of English families boarded ships for Ireland, Canada, the America colonies, and many of smaller tropical colonies in the hope of finding better lives abroad. Although the passage on the cramped, dank ships caused many to arrive in the New World diseased and starving, those families that survived the trip often went on to make valuable contributions to those new societies to which they arrived. Early immigrants bearing the Blackebyrne surname or a spelling variation of the name include: Daniel Blackburn who settled in Virginia in the year 1640; James Blackburn settled in Virginia in 1624; Stewart Blackborn arrived in Philadelphia, Pennsylvania in 1857.