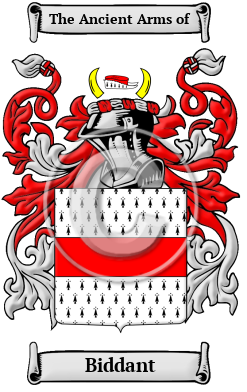 The ancestry of the name Biddant can be traced back to the Anglo-Saxon tribes of Britain. It is a name for a maker of buttons. The surname Biddant is a metonymic name derived from the Old French word boton, which means button.

Alternatively, the name could have been derived from the Old English "bi" + "dun," collectively meaning "dweller by the down." [1]

Early Origins of the Biddant family

The surname Biddant was first found in Hampshire and later in Gloucestershire and Somerset. Lower says the family can be traced to the 13th century in Hampshire where Sir Walter de Button was progenitor of the family about 1216 A.D. The family had flourished for several centuries in that county, intermarrying with many distinguished families, supplementing their estates with marriages of the heiresses of the Furneaux, Bryan, Turbevilles, Bassets and others.

According to the Pipe Rolls of 1177, Trihon Bidon held lands there at that time and over one hundred years later, William Bidun was listed in Hundredorum Rolls of Bedfordshire in 1279. [1]

Further to the north in Scotland, "Walter de Bydun witnessed King David's gift of Rindelgros (i.e. Rhind in Perthshire) to the Abbey of Reading c. 1143-47. He or a succeeding Walter appears several times as chancellor of Scotland between c. 1165 and 1178, and as a witness to royal charters. A twelfth century pedigree of the family is given in Pipe Roll Society Publications, vol. xxxv, p. xliii." [3]

On the infamous side, Matthew Button was executed on the 25th August 1355 for unlawfully taking and killing forty eight head of deer from the forest of Kingswood, the King's private hunting reserve. This person not only lived about the time of Robin Hood, he also seemed to indulge in the same kind of activities, except that Kingswood is about sixty miles south west of Sherwood.

Early History of the Biddant family

Biddant has been spelled many different ways. Before English spelling became standardized over the last few hundred years, spelling variations in names were a common occurrence. As the English language changed in the Middle Ages, absorbing pieces of Latin and French, as well as other languages, the spelling of people's names also changed considerably, even over a single lifetime. Many variations of the name Biddant have been found, including Button, Bitton, Buttoner, Buton, Biton, Buttons, Boutin, Bouttin, Bouton, Boutton, Budden, Buddan, Boudin, Bouddin, Buttan, Buddon, Buddin, Butten, Buttin, Butting, Budding, Buttane and many more.

Migration of the Biddant family to Ireland

Some of the Biddant family moved to Ireland, but this topic is not covered in this excerpt. More information about their life in Ireland is included in all our PDF Extended History products and printed products wherever possible.

Migration of the Biddant family

In an attempt to escape the chaos experienced in England, many English families boarded overcrowded and diseased ships sailing for the shores of North America and other British colonies. Those families hardy enough, and lucky enough, to make the passage intact were rewarded with land and a social environment less prone to religious and political persecution. Many of these families became important contributors to the young colonies in which they settled. Early immigration and passenger lists have documented some of the first Biddants to arrive on North American shores: Mary Button who settled in Jamaica in 1685; Thomas Button settled in Virginia in 1623; William Button settled in Plymouth Massachusetts in 1620; John Button settled in Baltimore Maryland in 1775.