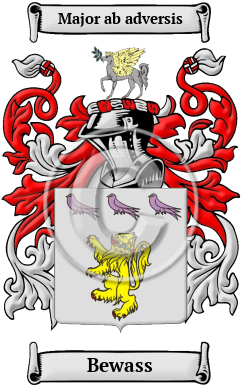 The birthplace of the surname Bewass is Cornwall, a rugged peninsula in southwestern England that is noted for its strong Gaelic traditions. Even though the usage of surnames was common during the Middle Ages, all English people were known only by a single name in early times. The process by which hereditary surnames came to be used is intriguing. As the number of inhabitants of Europe swelled, people began to assume an extra name to avoid confusion and to further identify them. Under the Feudal System of government, surnames evolved and they often reflected life on the manor and in the field. Although nickname surnames were rare among the Cornish, they did occasionally adopt names that reflected the physical characteristics or other attributes of the original bearer of the name. The name Bewass is a nickname type of surname for a handsome or beautiful person having been derived from the Old French word beau, meaning beautiful. The name could also have been a patronymic name created from the given name Hugh. Using the Welsh prefix ap or ab, the surname was Ab Hugh, which became Bugh, then Bew. Alternately, some instances of the name in Britain may have come with the Normans, perhaps deriving from the place name Bayeux in Calvados; and, it appears that the Scottish, or Northern English instances of the name may have Scandinavian roots.

Early Origins of the Bewass family

The surname Bewass was first found in Cornwall where they held a family seat from early times. Early recorded instances of the name include Robert le Beu, who was listed in the Assize Rolls of County Somerset in 1200. Bew Castle, a ruined 12th century castle near the village of Bewcastle, Cumbria, adds credence to the suggestion that there may have been a Scandinavian source for this name in the North.

Early History of the Bewass family

Notable amongst the family at this time was John de Bayeux (d. 1249), Justice Itinerant, otherwise called de Baiocis, a son of Hugh de Baiocis, a Lincolnshire Baron. ". He had property in Bristol and Dorset, but in 16 and 17 John forfeited it on outlawry for murder. In 1218 he paid a relief of 100l. and took possession of the family estates in Lincolnshire, and in the same year was judge itinerant for the counties of Cornwall, Devon, Somerset, and Dorset, along with 'J. Bathon. et Glascon. Episc.' (Dugdale, Orig. Juridic. (Chronica Series), p. 7). Next year, 4 Henry III...
Another 105 words (8 lines of text) are included under the topic Early Bewass Notables in all our PDF Extended History products and printed products wherever possible.

Migration of the Bewass family