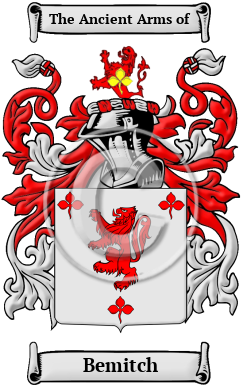 Early Origins of the Bemitch family

The surname Bemitch was first found in Normandy where the family was formerly Beaumis, Beaumeys, or Beametz and are from Beaumetz, near Abbeville. Today this is a commune in the Somme department in the Picardie (Picardy) region of northern France. When they arrived in Britain is not known but one can safely assume shortly after the Conquest as Richard de Belmiz, Viscount of Salop (Shropshire) witnessed a charter in 1087 of Salop Abbey. Richards be Beaumez witnessed a charter of Henry I., in 1124. Richard be Belmiz was Bishop of London in 1172. [1] The stronghold of the family was in Durham at Beamish, a township, in the chapelry of Tanfield, parish of Chester-Le-Street, union of Lanchester, Middle division of Chester ward. The place name dates back to 1288 when it was first listed as Bewmys and literally meant "beautiful mansion." from the Old French words "beau" + "mes." [2] "It stands in the wooded vale of Team, which expands itself near the house of Beamish into a fine strath. The mansion, which contains some curious old portraits, is one of the best family residences in the county." [3] Beamish Hall was originally built as a present in 1268 for the wedding of Isabella de la Leigh and Guiscard de Charron. The Hundredorum Rolls of 1273 list: Robert de Beaumeis, alias Beaumeis in Cambridgeshire; Roger de Beaumes in Shropshire; and Agnes be Beaumeys in Huntingdonshire. [4]

Early History of the Bemitch family

This web page shows only a small excerpt of our Bemitch research. Another 62 words (4 lines of text) covering the years 195 and 1950 are included under the topic Early Bemitch History in all our PDF Extended History products and printed products wherever possible.

During the era when a person's name, tribe and posterity was one of his most important possessions, many different spellings were found in the archives examined. Bemitch occurred in many references, and spelling variations of the name found included Beamish, Beemish, Beames and others.

More information is included under the topic Early Bemitch Notables in all our PDF Extended History products and printed products wherever possible.

Migration of the Bemitch family to Ireland

Some of the Bemitch family moved to Ireland, but this topic is not covered in this excerpt.
Another 55 words (4 lines of text) about their life in Ireland is included in all our PDF Extended History products and printed products wherever possible.

Migration of the Bemitch family

Gradually becoming disenchanted with life in Ireland many of these uprooted families sailed aboard the armada of sailing ships known as the "White Sails" which plied the stormy Atlantic. These overcrowded ships often arrived with only 60 to 70% of their original passenger list, many dying of illness and the elements, were buried at sea. In North America, early immigrants bearing the family name Bemitch, or a spelling variation of the surname include: Charles Beamish who settled in Philadelphia, Pennsylvania in 1832; William Beames who settled in Boston Massachusetts in 1651; Robert Beames who settled in Barbados and Jamaica in 1688.