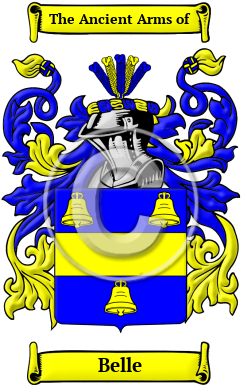 The Belle surname arose independently from several different sources. In some instances, it comes from the Old English word "belle" meaning "bell," and was most likely an occupational name for a bell ringer. It may have also been a name for someone who lived near a bell. Belle is also known to have arisen from the English and Scottish given name Bel, which derived from the Old French "beu" or "bel," meaning "handsome." [1]

"From Le Bel, a surname which frequently occurs in Normandy." [2]

Early Origins of the Belle family

The surname Belle was first found in Dumfriesshire. "John Bell appears as a notary in St. Andrews, 1248. A family of the name appears to have been hereditarily connected with the church of Dunkeld. Master David Bell was a canon there, 1263, and William Bell appears as dean, 1329-42. William Bel, vicar of Lamberton, witnessed a charter to Coldingham Priory, 1271." [3]

At one time, the Clan Bell was well known on the Scottish West March of the Scottish and English borders. But in 1587, the Parliament of Scotland passed a statute: "For the quieting and keping in obiedince of the disorderit subjectis inhabitantis of the borders hielands and Ilis." This statute disolved the Clan status. [4]

Robert le Bell was Mayor of Bristol in 1239. The Hundredorum Rolls of 1273 had many entries for the name typically with the Old French spelling: Nicholas filius Bele in Bedfordshire; Ralph le Bele in Cambridgeshire; and Hugh le Bel, in Oxfordshire; Thomas le Bel in Suffolk. [6]

Early History of the Belle family

During the era when a person's name, tribe and posterity was one of his most important possessions, many different spellings were found in the archives examined. Belle occurred in many references, and spelling variations of the name found included Bell, Belle and others.

Notable amongst the family name during their early history was The Blessed Arthur Bell (1590-1618), also known as Francis Bell, who was a Franciscan and English martyr; Sir Robert Bell (d. 1577) of Beaupre Hall, Norfolk, Speaker of the House of Commons; William Bell (died ca. 1668)...
Another 46 words (3 lines of text) are included under the topic Early Belle Notables in all our PDF Extended History products and printed products wherever possible.

Migration of the Belle family to Ireland

Some of the Belle family moved to Ireland, but this topic is not covered in this excerpt.
Another 83 words (6 lines of text) about their life in Ireland is included in all our PDF Extended History products and printed products wherever possible.

Belle migration to the United States +

Gradually becoming disenchanted with life in Ireland many of these uprooted families sailed aboard the armada of sailing ships known as the "White Sails" which plied the stormy Atlantic. These overcrowded ships often arrived with only 60 to 70% of their original passenger list, many dying of illness and the elements, were buried at sea. In North America, early immigrants bearing the family name Belle, or a spelling variation of the surname include:

Belle Settlers in United States in the 17th Century

Belle Settlers in United States in the 18th Century

Belle Settlers in United States in the 19th Century

Belle Settlers in Canada in the 18th Century

Belle Settlers in New Zealand in the 19th Century