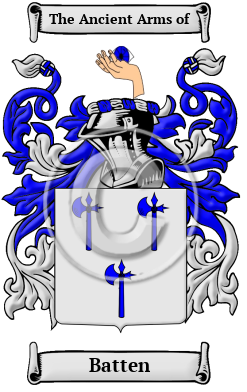 Today's generation of the Batten family bears a name that was brought to England by the wave of emigration that was started by the Norman Conquest of 1066. It comes from the Old English given name Batte, a pet form of Bartholomew. [1]

Early Origins of the Batten family

The surname Batten was first found in Somerset, where the "family of Batten have been seated for nearly six centuries. They are considered of Flemish origin. Among eminent merchants of the staple (wool-trade) temp. Edward I., were several De Beteyns and Batyns." [2]

The Subsidy Rolls of 1327 in Somerset include two entries for the family: Balin Bythemore; and Bathon Mayster. From these early spellings, the Feet of Fines of 1248 in Essex includes an entry for Walter Batun and later, Robert Batin was found in the Assize Rolls for Somerset in 1261. The Subsidy Rolls for Worcestershire includes William Baton in 1275 and the same rolls for Staffordshire in 1327 lists John Batten. [3]

"Batten is an estate in the parish of North Hill, Cornwall, where an ancient gentle family of the name once resided. The Battens are now established in the Honiton district, and the Battings in the Exeter district. There was a Joel Batin in the hundred of Wonford as far back as the 13th century. Somersetshire, however, would appear to be the ancient home of the name, and for six centuries the name has been established there, though now scantily represented." [4]

Again in Somerset, we found the following early entries for the family as both a forename and surname: Thomas Batyn; Batin atte Vete; Batin Power; Batin Walkelayn: and Bathon Mayster. All were listed as 1 Edward III, in other words during the first year of the reign of King Edward III. [5]

Early History of the Batten family

Norman surnames are characterized by a multitude of spelling variations. The frequent changes in surnames are largely due to the fact that the Old and Middle English languages lacked definite spelling rules. The introduction of Norman French to England, as well as the official court languages of Latin and French, also had pronounced influences on the spelling of surnames. Since medieval scribes and church officials recorded names as they sounded, rather than adhering to any specific spelling rules, it was common to find the same individual referred to with different spellings. The name has been spelled Batten, Battin, Battyne, Baten, Batin, Batton and many more.

Outstanding amongst the family at this time was Sir William Batten (c. 1600-1667), an English naval officer and politician who sat in the House of Commons from 1661 to 1667; and Henry Beighton (1687-1743), an English engineer and surveyor, Fellow of the Royal Society in 1720. Adrian Batten (fl. 1630), was organist of St. Paul's, the dates of whose birth and death cannot be ascertained. He was educated in the choir of Winchester Cathedral under John Holmes. In 1624 he removed to St. Paul's Cathedral, where he held the same office in addition to that of organist. Batten's name is well known...
Another 152 words (11 lines of text) are included under the topic Early Batten Notables in all our PDF Extended History products and printed products wherever possible.

Batten migration to the United States +

Many English families emigrated to North American colonies in order to escape the political chaos in Britain at this time. Unfortunately, many English families made the trip to the New World under extremely harsh conditions. Overcrowding on the ships caused the majority of the immigrants to arrive diseased, famished, and destitute from the long journey across the stormy Atlantic. Despite these hardships, many of the families prospered and went on to make invaluable contributions to the development of the cultures of the United States and Canada. Early North American immigration records have revealed a number of people bearing the name Batten or a variant listed above:

Batten Settlers in United States in the 17th Century

Batten Settlers in United States in the 18th Century

Batten Settlers in United States in the 19th Century

Batten Settlers in United States in the 20th Century

Batten Settlers in Australia in the 19th Century

Batten Settlers in New Zealand in the 19th Century

Historic Events for the Batten family +