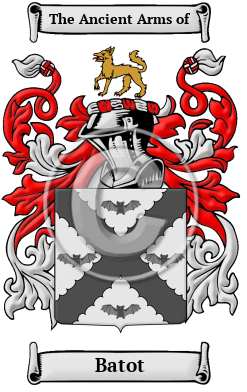 The ancestry of the name Batot dates from the ancient Anglo-Saxon culture of Britain. It comes from when the family lived as the nickname ‘the bat’ or as a petname of Bartholomew. "We have also to take into account the byname of a Winchester monk: Ælfricus qui Bata cognominabatur (c. 1051 Old English Bynames). This has given rise to various conjectures, none wholly satisfactory." [1]

Bardsley feels the name is "derived from the name of an ancestor, 'the son of Bartholomew,' from the nickname Bate or Bat; v. Batson, Bate, and Batty, " [2] and Smith similarly agrees the name denotes "the son of Bate, a pet form of Bartholomew (son of Talmai, furrow); one of stout, heavy appearance." [3]

Early Origins of the Batot family

The surname Batot was first found in Shropshire where William Bat was listed in 1170-1187. Herbert Bat was similarly listed there in the Pipe Rolls of 1182. [1] Another early record was Gerrard Bat who was Lord Mayor of London in 1240.

The Hundredorum Rolls of 1273 included: Gilbert Batte, Rutland; Reginald le Bat, Essex; and Matilda Battes, Cambridgeshire [2] while in Somerset, Clarice Batte was recorded there 1 Edward III (during the reign of King Edward III.) [4]

Early History of the Batot family

Spelling variations in names were a common occurrence before English spelling was standardized a few hundred years ago. In the Middle Ages, even the literate spelled their names differently as the English language incorporated elements of French, Latin, and other European languages. Many variations of the name Batot have been found, including Batt, Batte, Bat, Batts, Baat and others.

Distinguished members of the family include Anthony Batt (d. 1651), a Benedictine monk who resided for some years in the English monastery of his order at Dieulwart, in Lorraine. [5] M. Batt was a bookseller in London, 1642. His name occurs on several political pamphlets such as the...
Another 46 words (3 lines of text) are included under the topic Early Batot Notables in all our PDF Extended History products and printed products wherever possible.

Migration of the Batot family to Ireland

Some of the Batot family moved to Ireland, but this topic is not covered in this excerpt.
Another 30 words (2 lines of text) about their life in Ireland is included in all our PDF Extended History products and printed products wherever possible.

Migration of the Batot family

Families began migrating abroad in enormous numbers because of the political and religious discontent in England. Often faced with persecution and starvation in England, the possibilities of the New World attracted many English people. Although the ocean trips took many lives, those who did get to North America were instrumental in building the necessary groundwork for what would become for new powerful nations. Some of the first immigrants to cross the Atlantic and come to North America bore the name Batot, or a variant listed above: Anne and Christopher Batt who settled in Massachusetts in 1635; Dorothie Batt settled in 1638 with five children; Elizabeth Batt settled in Barbados in 1660.