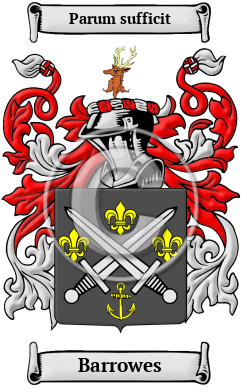 The name Barrowes is an old Anglo-Saxon name. It comes from when a family lived near a grove, or in any of a number of places called Barrow, The surname is derived from the Old English word, bearo, which means grove. As a local name, it could also be derived from a long hill or mound.

Early Origins of the Barrowes family

The surname Barrowes was first found in Lancashire, where they held a family seat from ancient times. "The Lancashire Barrows, who are named after a borough in the county, are best represented in the Ambleside district." [2]

One source claims the family was Norman in origin from Barou, near Falaise in Normandy. "In 1165 Robert de Jouvigny held a fief at Barrou, Normandy, of the Honour of Grent-Mesnil." [3]

While Lancashire is generally understood the family's stronghold, Lincolnshire may have been their ancient homestead. "Roger de Barewe of Lincoln was deceased before 1271. In 1194 William de Barewe had a suit in the same county. In 1130 Adelaid de Barou occurs in Lincoln, and in 1093 Walleran de Baro witnessed a charter of Chester Abbey." [3]

The reader should know that early rolls were almost always listed in relationship to the year of the sovereign's reign. In other words, "1 Edward III," would denote "during the first year of King Edward III's reign."

Early History of the Barrowes family

Before the last few hundred years, the English language had no fast system of spelling rules. For that reason, spelling variations are commonly found in early Anglo-Saxon surnames. Over the years, many variations of the name Barrowes were recorded, including Barrow, Barrough, Barrows and others.

Notables of this surname at this time include: Thomas Barowe or Barrow (d. 1497?), English ecclesiastic and judge, Rector of Olney in Buckinghamshire, and was appointed to a prebend in St. Stephen's Chapel in the palace of Westminster in July 1483, shortly after the accession of Richard III, and in September of the same year to the Mastership of the Rolls. [6] Peter Baro (1534-1599), English controversialist, son of Stephen Baro and Philippa Petit, his wife, was...
Another 76 words (5 lines of text) are included under the topic Early Barrowes Notables in all our PDF Extended History products and printed products wherever possible.

Barrowes migration to the United States +

To escape oppression and starvation at that time, many English families left for the "open frontiers" of the New World with all its perceived opportunities. In droves people migrated to the many British colonies, those in North America in particular, paying high rates for passages in cramped, unsafe ships. Although many of the settlers did not make the long passage alive, those who did see the shores of North America perceived great opportunities before them. Many of the families that came from England went on to make essential contributions to the emerging nations of Canada and the United States. Research into various historical records revealed some of first members of the Barrowes family emigrate to North America:

Barrowes Settlers in United States in the 17th Century