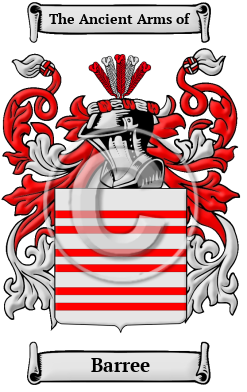 The name is originally of Norman origin, deriving from the old French word "barri," meaning "rampart;" though, it is also thought that a small number of bearers of this name come from the Gaelic names "ó Beargha," or "ó Báire."

Early Origins of the Barree family

The surname Barree was first found in Cork (Irish: Corcaigh) the ancient Kingdom of Deis Muin (Desmond), located on the southwest coast of Ireland in the province of Munster. "The Barrys were amongst the earliest Anglo-Norman settlers in Ireland, and have held large possessions in the county of Cork ever since the reign of Henry II. They had immense possessions, and their chief seat, Castle Lyons, vied in splendor with the most celebrated mansions in the South of Ireland. Their early residences at Barryscourt and Buttevant were also extensive and strong. " [1]

Phillip de Barry (fl. 1183), was a warrior, the son of William de Barry, by Angharat, uterine sister of Robert Fitz-Stephen. "Having received from his uncle a grant of three cantreds in his own half of 'the kingdom of Cork,' viz. Olethan (north of Cork), afterwards 'Barrymore,' Muskerry Donegan (round Baltimore), and Killede, he came to Ireland at the end of February 1183, accompanied by his brother Gerald and their followers, to take possession and to assist his uncle Fitz-Stephen. " [2]

"The Barrys of Ballyclough, spring from a second son of Barry of Lisnegar, and their present chief, James Barry, Esq., of Ballyclough, is the direct lineal representative of the Anglo- Norman Barry, who, with others, invaded Ireland in 1171. His property of Ballyclough, he inherits from his maternal ancestors, the Purdons." [1]

Early History of the Barree family

Notable amongst the family name at this time was David Fitz-James de Barry, 18th Baron Barry, 5th Viscount Buttevant (c. 1550-1617), an Irish peer; "Lo" (James) Barry (ca. 1591), considered to be the first Irish dramatist: David Barry, Earl of Barrymore (1605-1642), a soldier killed in the war of...
Another 49 words (4 lines of text) are included under the topic Early Barree Notables in all our PDF Extended History products and printed products wherever possible.

Migration of the Barree family

Some of the first settlers of this family name or some of its variants were: Clement Barry who settled in St. Christopher in 1633; Debora Barrie who settled in Virginia in 1635; Elizabeth Barry, who settled in New England in 1765.