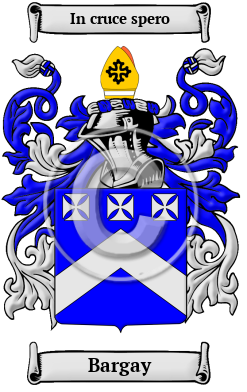 The history of the Bargay family goes back to the ancient Anglo-Saxon culture of Britain. It is derived from the family living in the parish of Berkeley in the county of Gloucestershire.

"This place, according to Sir Robert Atkyns, the historian of Gloucestershire, derives its name from the Saxon Beorc, a birch-tree, and Leas, a pasture; whence it has been inferred that the parish was formerly remarkable for the growth of birch-trees. It was always a place of considerable importance; and at a very early period it gave name to the great manor of Berkeley, which during the heptarchy was held of the crown, at £500. 17. 2. per annum, by Roger de Berkeley, a near relative of Edward the Confessor, and lord of Dursley, from whom the earliest authentic pedigree of the Berkeley family is deduced. Berkeley, notwithstanding the residence of the oldest branches of the family in their castle at Dursley. William the Conqueror, professing high regard for all the relatives of Edward the Confessor, granted the manor of Berkeley to Roger Berkeley, of Dursley, by whose descendants it was held till the reign of Henry II." [1]

Early Origins of the Bargay family

The surname Bargay was first found in Gloucestershire, where "this noble race descend from Thos, de Berkely, Lord of Berkeley castle, co. Gloucester, temp. Edward I., and fifth in lineal succession from Harding, a Dane of royal blood, and one of the companions of William the Conqueror. " [2]

Henry de Barcley and Helewys' de Berkele were listed in the Subsidy Rolls of Sussex in 1327. [4]

Early History of the Bargay family

Until quite recently, the English language has lacked a definite system of spelling rules. Consequently, Anglo-Saxon surnames are characterized by a multitude of spelling variations. Changes in Anglo-Saxon names were influenced by the evolution of the English language, as it incorporated elements of French, Latin, and other languages. Although Medieval scribes and church officials recorded names as they sounded, so it is common to find one person referred to by several different spellings of his surname, even the most literate people varied the spelling of their own names. Variations of the name Bargay include Barclay, Berkeley, Barcley, Berkely, Berkley and others.

Another 34 words (2 lines of text) are included under the topic Early Bargay Notables in all our PDF Extended History products and printed products wherever possible.

Migration of the Bargay family to Ireland

Some of the Bargay family moved to Ireland, but this topic is not covered in this excerpt.
Another 57 words (4 lines of text) about their life in Ireland is included in all our PDF Extended History products and printed products wherever possible.

Migration of the Bargay family

Searching for a better life, many English families migrated to British colonies. Unfortunately, the majority of them traveled under extremely harsh conditions: overcrowding on the ships caused the majority of the immigrants to arrive diseased, famished, and destitute from the long journey across the ocean. For those families that arrived safely, modest prosperity was attainable, and many went on to make invaluable contributions to the development of the cultures of the new colonies. Research into the origins of individual families in North America revealed records of the immigration of a number of people bearing the name Bargay or a variant listed above: Thomas Barclay who settled in Maryland in 1750; Alex Barclay settled in Norfolk, Virginia in 1822; Benjamin, George, Henry, James, Moses, Thomas and William Barclay, all settled in Philadelphia, Pennsylvania between 1837 and 1864.