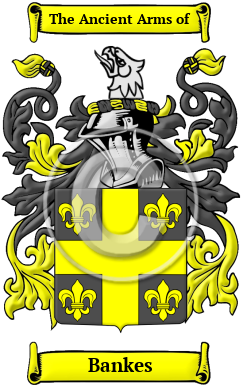 The name Bankes is part of the ancient legacy of the Anglo-Saxon tribes of Britain. It is a product of when the family lived close to a slope, or a hillside. The surname is derived from the Old English word banke. [1]

Early Origins of the Bankes family

One branch of the family was found at Winstanley in Lancashire from early times. "In the reign of James I., the manor belonged to James Bancks, a descendant of the Bankes, of BankNewton, in Craven; in whose family the property continued until about 1731, when, by marriage with the heiress of William Bankes, it passed to the family of Holme, who eventually changed their name to Bankes. Winstanley Hall, existing in the 16th century, is the seat of the Bankes family, and stands in a spacious and delightful park: it has been lately re-edified and improved." [3]

Early History of the Bankes family

The first dictionaries that appeared in the last few hundred years did much to standardize the English language. Before that time, spelling variations in names were a common occurrence. The language was changing, incorporating pieces of other languages, and the spelling of names changed with it. Bankes has been spelled many different ways, including Banke, Banck, Bancks, Banckes, Banks, Bankes and others.

Distinguished members of the family include Sir Joseph Banks, President of the Royal Society; William Bankes, High Sheriff of Lancaster, 1784; Sir John Bankes (1589-1644), Lord Chief Justice of the Common Pleas to Charles I, who held a family seat at Corfe Castle in Dorset; Sir John Banks, 1st Baronet FRS (1627-1699), an English merchant and politician, one of the wealthiest merchants in London, Fellow of the Royal Society in 1668; and his son, Caleb Banks (1659-1696), an English politician; and Sir Ralph Bankes (1631-1677), MP for Corfe, responsible for the building of the new family seat at Kingston Lacy. Richard Banke...
Another 123 words (9 lines of text) are included under the topic Early Bankes Notables in all our PDF Extended History products and printed products wherever possible.

Bankes migration to the United States +

Thousands of English families in this era began to emigrate the New World in search of land and freedom from religious and political persecution. Although the passage was expensive and the ships were dark, crowded, and unsafe, those who made the voyage safely were rewarded with opportunities unavailable to them in their homeland. Research into passenger and immigration lists has revealed some of the very first Bankess to arrive in North America:

Bankes Settlers in United States in the 17th Century

Bankes Settlers in United States in the 18th Century

Bankes Settlers in Australia in the 19th Century