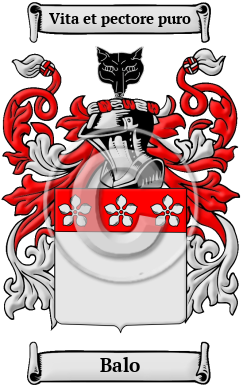 The Norman Conquest of England in 1066 added many new elements to an already vibrant culture. Among these were thousands of new names. The Balo family lived in Cheshire where they were first established at Moreton on the Wirral Peninsula. Originally, the name was a variation of the Old French belleau or bella aqua, which means good water or clear water and likely is derived from the name of any number of locations so named in Normandy. [1]

Early Origins of the Balo family

The surname Balo was first found in Cheshire where they held a family seat as Lords of the Manor of Moreton in the Wirral Peninsula. The name of the Norman noble who was granted lands at Moreton was interchangeably Bellet or Bellot of Callouville in Normandy, but emerged in the 12th century as Bellow or Bellows. The family held a family seat at Moreton at the time of the Norman Conquest of England by Duke William of Normandy in 1066 A.D. Moreton is now a seaside resort. East Rudham, Norfolk was "anciently the property of the family of Belet." [2]

Early History of the Balo family

This web page shows only a small excerpt of our Balo research. Another 118 words (8 lines of text) covering the years 1663, 1612, 1604, 1542 and 1596 are included under the topic Early Balo History in all our PDF Extended History products and printed products wherever possible.

Norman surnames are characterized by a multitude of spelling variations. The frequent changes in surnames are largely due to the fact that the Old and Middle English languages lacked definite spelling rules. The introduction of Norman French to England, as well as the official court languages of Latin and French, also had pronounced influences on the spelling of surnames. Since medieval scribes and church officials recorded names as they sounded, rather than adhering to any specific spelling rules, it was common to find the same individual referred to with different spellings. The name has been spelled Bellowe, Bellow, Bellows, Bellot, Bellet, Bellett, Bellowes, Beloe, Belloe, Bellough, Belloes, Beloes, Belloughs, Ballot, Ballott, Ballow, Ballowe, Ballows, Ballowes and many more.

Outstanding amongst the family at this time was Sir William Bellows of Moreton. Stephen Bellott, a Huguenot, sued his father-in-law Christopher Mountjoy in what became known in British law as Bellott v. Mountjoy which was heard at the Court of Requests in Westminster on 11 May 1612. While the case is of little significance, interestingly William Shakespeare was called before the court and admitted that he had played...
Another 67 words (5 lines of text) are included under the topic Early Balo Notables in all our PDF Extended History products and printed products wherever possible.

Migration of the Balo family to Ireland

Some of the Balo family moved to Ireland, but this topic is not covered in this excerpt. More information about their life in Ireland is included in all our PDF Extended History products and printed products wherever possible.

Migration of the Balo family

Many English families emigrated to North American colonies in order to escape the political chaos in Britain at this time. Unfortunately, many English families made the trip to the New World under extremely harsh conditions. Overcrowding on the ships caused the majority of the immigrants to arrive diseased, famished, and destitute from the long journey across the stormy Atlantic. Despite these hardships, many of the families prospered and went on to make invaluable contributions to the development of the cultures of the United States and Canada. Early North American immigration records have revealed a number of people bearing the name Balo or a variant listed above: Jo Bellowes who settled in Boston, Massachusetts in 1635; James Bellow arrived in Philadelphia, Pennsylvania in 1868; Jean Bellot settled in Charles Town [Charleston], South Carolina in 1763.