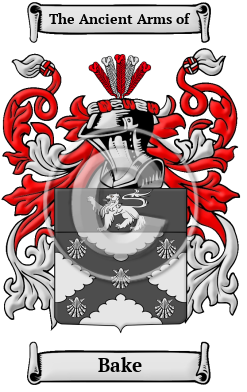 The distinguished surname Bake comes from the ancient culture of the Anglo-Saxons. The name is derived from the Old English "baecere," meaning "baker," and was first borne as an occupational name. [1] [2] [3]

"Speaking generally, this surname is most numerous in the south of England, and diminishes rapidly in frequency as we proceed northward, until we reach the counties bordering Scotland, where it meets its extinction within sight of the Cheviot Hills. Baker is a name which prefers the coast; and the manner in which it abounds in almost all the coast counties of southern England (excluding Cornwall and Dorset), from Monmouth round to Suffolk, is very remarkable, and not at first sight intelligible. The counties of Monmouth, Somerset, Sussex, and Surrey stand foremost amongst those containing the greatest number of Bakers." [4]

Early Origins of the Bake family

The surname Bake was first found in Norfolk, where the Pipe Rolls of 1177, list William le Bakere. Later in Lancashire, Robert Bakere was recorded in the Assize Rolls of 1246 and Walter le Backere was listed in Hampshire in 1280. [5]

Thirteenth century England was a very different place that today. Early feudal rolls provided the king of the time a method of cataloguing holdings for taxation, but today they provide a glimpse into the wide surname spellings in use at that time. The Hundredorum Rolls of 1273 listed: Walter le Baker, Devon; William le Bakere, Oxfordshire; and Alan le Baker, Sussex. [6]

Early History of the Bake family

Although the name, Bake, appeared in many references, from time to time, the surname was shown with the spellings Baker, Bakere, Baiker, Backer and others.

Notable amongst the family name during their early history was Aaron Eli Baker (1620-1683), an English colonial agent of the Honourable East India Company, President of Madras (1652-1655); Thomas Baker (1625?-1689), an English mathematician, best known for producing a solution of biquadratic equations; Samuel Baker, D.D. (d. 1658), a Church of England clergyman and divine; James Baker (died 1689)...
Another 58 words (4 lines of text) are included under the topic Early Bake Notables in all our PDF Extended History products and printed products wherever possible.

Migration of the Bake family to Ireland

Some of the Bake family moved to Ireland, but this topic is not covered in this excerpt.
Another 78 words (6 lines of text) about their life in Ireland is included in all our PDF Extended History products and printed products wherever possible.

Bake migration to the United States +

Gradually becoming disenchanted with life in Ireland many of these uprooted families sailed aboard the armada of sailing ships known as the "White Sails" which plied the stormy Atlantic. These overcrowded ships often arrived with only 60 to 70% of their original passenger list, many dying of cholera, typhoid, dysentery or small pox. In North America, some of the first immigrants who could be considered kinsmen of the Bake family name Bake, or who bore a variation of the surname were

Bake Settlers in United States in the 17th Century

Bake Settlers in United States in the 18th Century

Bake Settlers in United States in the 19th Century