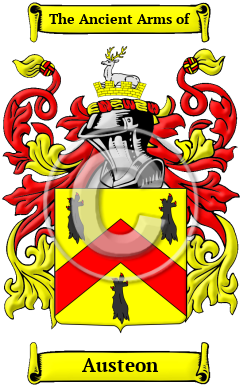 The Austeon family name is derived from the given name Austin, which was the vernacular form of the Latin name "Augustus", meaning "majestic." As a personal name, Augustine was popular due to St. Augustine of Hippo (354-430) who had a great influence on early Christianity, as well as St Augustine of Canterbury, first Archbishop of Canterbury, who founded the oldest see in England, in 597.

Early Origins of the Austeon family

The surname Austeon was first found in Bedfordshire (Old English: Bedanfordscir), located in Southeast-central England, formerly part of the Anglo-Saxon kingdom of Mercia where they held a family seat from ancient times.

"A whole column of Austin appears in the London Directory. The name was made common by the Austin Friars, or Black Canons, as they were often styled from their black cloaks, who were established early in the 12th century in England, and possessed of about 170 houses." [1]

"It is confined for the most part to the central and eastern counties of the south of England; and does not extend in any frequency north of Derbyshire or west of Dorset. The counties of Kent and Oxford contain the greatest numbers of Austins. In the thirteenth century it was a common name in Cambridgeshire." [2]

Early History of the Austeon family

Sound was what guided spelling in the essentially pre-literate Middle Ages, so one person's name was often recorded under several variations during a single lifetime. Also, before the advent of the printing press and the first dictionaries, the English language was not standardized. Therefore, spelling variations were common, even among the names of the most literate people. Known variations of the Austeon family name include Austin, Austins, Austen, Austeane, Ostian, Ousteane, Owstyne, Ostiane and many more.

Migration of the Austeon family to Ireland

Some of the Austeon family moved to Ireland, but this topic is not covered in this excerpt.
Another 37 words (3 lines of text) about their life in Ireland is included in all our PDF Extended History products and printed products wherever possible.

Migration of the Austeon family

For political, religious, and economic reasons, thousands of English families boarded ships for Ireland, Canada, the America colonies, and many of smaller tropical colonies in the hope of finding better lives abroad. Although the passage on the cramped, dank ships caused many to arrive in the New World diseased and starving, those families that survived the trip often went on to make valuable contributions to those new societies to which they arrived. Early immigrants bearing the Austeon surname or a spelling variation of the name include: David Austin, an early saddle-bag preacher who was ordained in the Presbytery of New York in 1788; David arrived in New York by way of Antrim; John Austin, the great grandfather of Rutherford Hayes, known as the &quot.