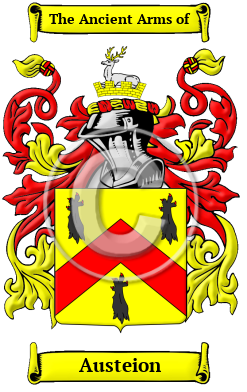 The Austeion family name is derived from the given name Austin, which was the vernacular form of the Latin name "Augustus", meaning "majestic." As a personal name, Augustine was popular due to St. Augustine of Hippo (354-430) who had a great influence on early Christianity, as well as St Augustine of Canterbury, first Archbishop of Canterbury, who founded the oldest see in England, in 597.

Early Origins of the Austeion family

The surname Austeion was first found in Bedfordshire (Old English: Bedanfordscir), located in Southeast-central England, formerly part of the Anglo-Saxon kingdom of Mercia where they held a family seat from ancient times.

"A whole column of Austin appears in the London Directory. The name was made common by the Austin Friars, or Black Canons, as they were often styled from their black cloaks, who were established early in the 12th century in England, and possessed of about 170 houses." [1]

"It is confined for the most part to the central and eastern counties of the south of England; and does not extend in any frequency north of Derbyshire or west of Dorset. The counties of Kent and Oxford contain the greatest numbers of Austins. In the thirteenth century it was a common name in Cambridgeshire." [2]

Early History of the Austeion family

Before the last few hundred years, the English language had no fast system of spelling rules. For that reason, spelling variations are commonly found in early Anglo-Saxon surnames. Over the years, many variations of the name Austeion were recorded, including Austin, Austins, Austen, Austeane, Ostian, Ousteane, Owstyne, Ostiane and many more.

Migration of the Austeion family to Ireland

Some of the Austeion family moved to Ireland, but this topic is not covered in this excerpt.
Another 37 words (3 lines of text) about their life in Ireland is included in all our PDF Extended History products and printed products wherever possible.

Migration of the Austeion family

To escape oppression and starvation at that time, many English families left for the "open frontiers" of the New World with all its perceived opportunities. In droves people migrated to the many British colonies, those in North America in particular, paying high rates for passages in cramped, unsafe ships. Although many of the settlers did not make the long passage alive, those who did see the shores of North America perceived great opportunities before them. Many of the families that came from England went on to make essential contributions to the emerging nations of Canada and the United States. Research into various historical records revealed some of first members of the Austeion family emigrate to North America: David Austin, an early saddle-bag preacher who was ordained in the Presbytery of New York in 1788; David arrived in New York by way of Antrim; John Austin, the great grandfather of Rutherford Hayes, known as the &quot.