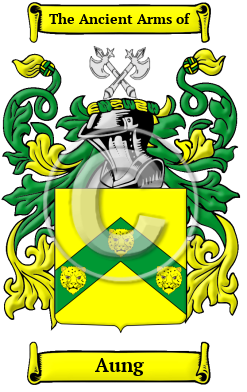 Aung is a name of ancient Anglo-Saxon origin and comes from the family once having lived in an area that was referred to as the ing, which means the meadow by a river. [1] The name could also have been a baptismal name as in son of Inge. [2]

"Ing is an ancient clerical name in [Buckinghamshire]. Roger Inge was rector of Maid's Moreton in 1291; and John Inge was vicar of Stanton - Barry in 1425." [3]

Early Origins of the Aung family

The surname Aung was first found in Leicestershire where the first record of the family was found c. 1160 when the Latin form Inga was recorded. This entry may have been a forename but more likely a surname. As a forename, we continue with Inga filia Thoire in the Assize Rolls of Lincolnshire in 1202 and later Inga of the Hull in the Subsidy Rolls of Warwickshire in 1332.

The Hundredorum Rolls of 1273 had two listings for the family: John Inge, Oxfordshire; and William Inge, Huntingdonshire. [2] Robert Inge was rector of Salthouse, Norfolk in 1327. [5]

Early History of the Aung family

Sound was what guided spelling in the essentially pre-literate Middle Ages, so one person's name was often recorded under several variations during a single lifetime. Also, before the advent of the printing press and the first dictionaries, the English language was not standardized. Therefore, spelling variations were common, even among the names of the most literate people. Known variations of the Aung family name include Inge, Ing and others.

Notables of the family at this time include Hugh Inge or Ynge, (1527-1528) Achbishop of Dublin and Lord Chancellor of Ireland, born at Shepton Mallet, Somersetshire. He became a scholar of Winchester College in 1480, and in 1484 became scholar, and in 1488 fellow, of New College, Oxford, where he graduated in arts and resided until 1496. He travelled in foreign parts, and received the degree of D.D. from a continental university, being incorporated in the same degree at Oxford on 3 April 1511. He...
Another 85 words (6 lines of text) are included under the topic Early Aung Notables in all our PDF Extended History products and printed products wherever possible.

Migration of the Aung family

For political, religious, and economic reasons, thousands of English families boarded ships for Ireland, Canada, the America colonies, and many of smaller tropical colonies in the hope of finding better lives abroad. Although the passage on the cramped, dank ships caused many to arrive in the New World diseased and starving, those families that survived the trip often went on to make valuable contributions to those new societies to which they arrived. Early immigrants bearing the Aung surname or a spelling variation of the name include: Richard Inge settled in Jamaica in 1690; Richard Inge settled in Nevis in 1654.