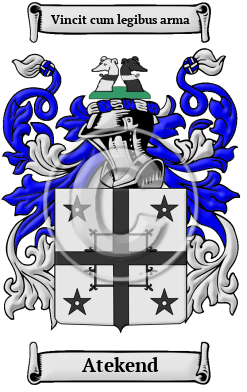 The origins of the Atekend name come from when the Anglo-Saxon tribes ruled over Britain. The name Atekend was originally derived from a family having lived the personal name Adam. Atekend is a diminutive which means son of Adam. [1] [2] [3]

"There is no need of course to prove this, but it is interesting to note the following: 'Adam le Fullere,' a citizen of London, is twice referred to as Adekin le Fullere (1073, Hundred Rolls)." [4]

Early Origins of the Atekend family

We find the first records of the family using the "E" prefix in Oxfordshire where Edekin Gomey was listed in the Hundredorum Rolls of 1279. The same rolls also included an entry for Joan Edekin. Elena Edyknes was listed in the Subsidy Rolls for Somerset in 1327. [3]

"Though not of early introduction it became well established in Ireland in the seventeenth century, especially in Cork where the Atkins family, who had come from Somerset, were prominent in the commercial life of the city; they also established themselves in the Youghal area." [7]

"Atkins, Adkins. - A characteristic surname of the midland and eastern counties, being at present most relatively numerous in Northamptonshire, Oxfordshire, Staffordshire, Warwickshire, and Lincolnshire. Its place is taken in the north of England by Atkinson. These names are regarded as diminutives of Adam." [8]

Early History of the Atekend family

Before English spelling was standardized a few hundred years ago, spelling variations of names were a common occurrence. Elements of Latin, French and other languages became incorporated into English through the Middle Ages, and name spellings changed even among the literate. The variations of the surname Atekend include Adkin, Atkin, Atkins, Adekin, Adekyns, Adekyn, Adkins and many more.

Distinguished members of the family include Richard Atkins (1559?-1581), English martyr, born at Ross in Herefordshire; Henry Atkins (1558-1635), English physician, born in 1558, son of Richard Atkins of Great Berkhamstead, Hertfordshire; William Atkins (1601-1681), an English Jesuit; Robert Adkins (1626-1685), English ejected minister of 1662 from Chard, Somerset; Richard Atkyns (1615-1677), an English writer and printer from Gloucestershire; Sir Edward Atkyns...
Another 62 words (4 lines of text) are included under the topic Early Atekend Notables in all our PDF Extended History products and printed products wherever possible.

Migration of the Atekend family to Ireland

Some of the Atekend family moved to Ireland, but this topic is not covered in this excerpt.
Another 78 words (6 lines of text) about their life in Ireland is included in all our PDF Extended History products and printed products wherever possible.

Migration of the Atekend family

A great wave of immigration to the New World was the result of the enormous political and religious disarray that struck England at that time. Families left for the New World in extremely large numbers. The long journey was the end of many immigrants and many more arrived sick and starving. Still, those who made it were rewarded with an opportunity far greater than they had known at home in England. These emigrant families went on to make significant contributions to these emerging colonies in which they settled. Some of the first North American settlers carried this name or one of its variants: Sir Jonathon Atkins who was Governor of Barbados in 1663; Henry Atkins settled in Plymouth in 1641; Thomas Adkins settled in East Hartford in 1682.