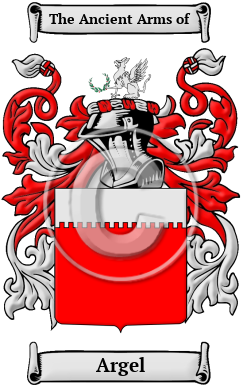 The name Argel was brought to England by the Normans when they conquered the country in 1066. It comes from the Dutch surname Van Arkel. The name Van Arkel may spring from the Anglo-Saxon form of Hercules, which is Ercol. A less likely root of the name is the parish of Ercoll Magna, or High Ercoll in Shropshire.

Early Origins of the Argel family

The surname Argel was first found in Berwickshire, in south east Scotland, arriving in Scotland soon after the Norman Conquest in 1066. They are the northern branch of the family name descended from Anketell, or Arnketill.

Early History of the Argel family

Before English spelling was standardized a few hundred years ago, spelling variations of names were a common occurrence. Elements of Latin, Norman French and other languages became incorporated into English throughout the Middle Ages, and name spellings changed even among the literate. The variations of the surname Argel include Arkell, Arkle, Arkill, Arcle, Argal, Argall, Arnkell, Artell, Artill, Arctall, Arktale, Arktell, Arktull, Arkgale and many more.

Outstanding amongst the family at this time was Richard Argall (c.1533-1588) of East Sutton, Kent; and his son, Sir Samuel Argall (c. 1572-1626), an English adventurer, Naval officer and Deputy-Governor of Virginia. He was "descended from an old Kentish family who afterwards settled at Walthamstow in Essex. His first appearance in history is among the early adventurers to Virginia, where we find him in July 1609 in charge of a small barque lying at anchor off Jamestown, where he was sent to trade on behalf of a Mr, Cornells, and to fish for sturgeon. His next task, after his return home...
Another 120 words (9 lines of text) are included under the topic Early Argel Notables in all our PDF Extended History products and printed products wherever possible.

Migration of the Argel family

In England at this time, the uncertainty of the political and religious environment of the time caused many families to board ships for distant British colonies in the hopes of finding land and opportunity, and escaping persecution. The voyages were expensive, crowded, and difficult, though, and many arrived in North America sick, starved, and destitute. Those who did make it, however, were greeted with greater opportunities and freedoms that they could have experienced at home. Many of those families went on to make important contributions to the young nations in which they settled. Early immigration records have shown some of the first Argels to arrive on North American shores: Sir Samuel Argal who settled in Virginia in 1624.