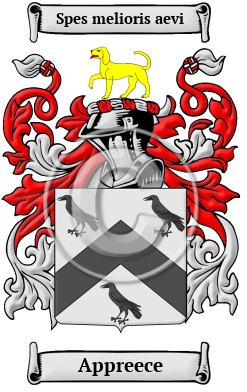 The origins of the Welsh name Appreece go back to those ancient Celts known as the Britons that once occupied the hills and Moors of Wales. This old Welsh surname is from the Welsh personal name Rhys, which also took the forms Rice and Rees. [1] [2] This name was originally derived from the Old Welsh forename Ris, which means ardour. [2]

Early Origins of the Appreece family

The surname Appreece was first found in Carmarthenshire (Welsh: Sir Gaerfyrddin), located in Southwest Wales, one of thirteen historic counties and presently one of the principal area in Wales. Sir Elidir Dhu who flourished temp. Richard I., was the direct descendant of the family of Rees of Killymaenllwyd, county Carmarthen. [3]

"In 1115, Grufydd ab Rhys, Prince of South Wales, took sanctuary in the church of Aberdaron, from the treachery of Grufydd ab Cynan, sovereign of North Wales, who intended to deliver him into the hands of the English monarch, Henry I. The young prince escaped with his partisans by night, and set forward on his journey to the deep forest of Strath Towy, in South Wales, where, having collected the adherents of his family, he commenced hostilities against the Norman and Flemish settlers. " [6]

Later Cheshire, England became a stronghold for the family as the Wills at Chester listed: Thomas ap-Reese, 1606; Thomas Rees, of Tybroughton, 1647; and Giles Reece, coinmaker, of Chester. [1]

Early History of the Appreece family

Although there are comparatively few Welsh surnames, they have a great many spelling variations. Variations of Welsh names began almost immediately after their acceptance within Welsh society. In the Middle Ages, it was up to priests and the few other people that recorded names in official documents to decide how to spell the names that they heard. Variations that occurred because of improper recording increased dramatically as the names were later transliterated into English. The Brythonic Celtic language of Wales, known by natives as Cymraeg, featured many highly inflected sounds that could not be properly captured by the English language. Spelling variations were, however, also carried out according to an individual's design: a branch loyalty within the family, a religious adherence, or even patriotic affiliations were all indicated by the particular variation of one's name. The spelling variations of the name Appreece have included Rees, Reece, Rhys, Ap Rhys and others.

Prominent amongst the family during the late Middle Ages was Edmund Prys (c. 1541-1624), Welsh translator of the psalms into Welsh verse, son of Sion (John) ap Rhys of Tyddyn Du in the parish of Maen Twrog, Merionethshire. Prys was a skilful composer in the strict Welsh metres, and took an active part in the bardic life of his time. [7] Lewys Dwnn or more properly Lewys ap Rhys ap Owain (d. 1616?), was "Deputy-Herald for Wales, derived his accepted surname from...
Another 81 words (6 lines of text) are included under the topic Early Appreece Notables in all our PDF Extended History products and printed products wherever possible.

Migration of the Appreece family

Many Welsh joined the great migrations to North America in the late 1800s and early 1900s. Like their Scottish and Irish neighbors, many Welsh families left their homeland hoping to find hope and prosperity in a land that the English did not exercise a tight rule over. Those Welsh immigrants that successfully traveled to North America went on to make significant contributions to the rapid development of both Canada and the United States in terms of the settling of land and the establishment of industry. They also added to the rich cultural heritage of both countries. An examination into the immigration and passenger lists has discovered a number of people bearing the name Appreece: Henry Reece settled in Nevis in 1663; along with Jane; Richard Reece settled in New England in 1668; Barbara, Jacob, Mathew, Thomas and William Reece all arrived in Philadelphia between 1840 and 1870.