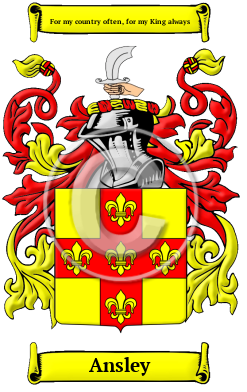 Early Origins of the Ansley family

The surname Ansley was first found in Nottinghamshire at Annesley, a parish, in the union of Basford, N. division of the wapentake of Broxtow. [1] "But there is probably a north English local origin also. There is also Ansley, a parish in Warwickshire. " [2]

Robert de Insula (d. 1283), bishop of Durham, born at Holy Island, apparently of humble parentage may be related to the family, but it is difficult to confirm as "the Lanercost chronicler calls him Robertus de Coquina." [3]

But we must look to the aforementioned Nottinghamshire to find one of the first records of the family. For it is there in 1273, the Hundredorum Rolls listed Johannes de Anneslegh. In Yorkshire, Johannes de Andeslay was listed there in the Yorkshire Poll Tax Rills of 1379 and the Placita de Quo Warranto, temp. Edward I-III. includes an entry for John de Annesley, Yorkshire, 20 Edward I (during the twentieth year of Edward I's reign). [2]

However, much further to the north in Scotland, William de Hanesley witnessed a charter by Walter, Bishop of Glasgow, between 1208 and 1218. "He is probably William de Anslee, Canon of Glasgow c. 1220. In 1221 Magister Thomas de Aneslei was one of a number appointed to settle a dispute between the monks of Kelso and the bishop of Glasgow, and Sir Aymer de Aynesley was one of the knights appointed to settle the law of the marches in 1249. Two individuals of this name rendered homage in 1296 [to King Edward I of England]: John le fiz Johan de Anesleye of Roxburghshire, and Johan de Anesleye of Crucfut of Lanarkshire. Adam de Aynesleye was juror on an inquisition held at Roxburgh in 1357, and John of Aynesley witnessed a grant of the forest of Eteryk to John Kerre in 1358. In 1377 Robert II granted to William de Aynysley a charter of the lands of Dolfynston in the sheriffdom of Roxburgh forfeited by John de Aynysley his father." [4]

Early History of the Ansley family

During the era when a person's name, tribe and posterity was one of his most important possessions, many different spellings were found in the archives examined. Ansley occurred in many references, and spelling variations of the name found included Ainslie, Ainsley, Ansley, Anslie, Aynslie, Aynsley, Aynsly, Aynsle, Ainley, Endlsley and many more.

Notable amongst the family name during their early history was William de Aynysley, who was granted a charter of the lands of Dolfynston in the sheriffdom of Roxburgh forfeited by John de Aynysley his father. The lands of Dolphingstoun passed, c. 1500, to the Kers of Cessfurd through marriage of Mark Ker with Marjorie Ainslie, daughter and heiress of John...
Another 60 words (4 lines of text) are included under the topic Early Ansley Notables in all our PDF Extended History products and printed products wherever possible.

In the United States, the name Ansley is the 7,051st most popular surname with an estimated 4,974 people with that name. [5]

Ansley migration to the United States +

Gradually becoming disenchanted with life in Ireland many of these uprooted families sailed aboard the armada of sailing ships known as the "White Sails" which plied the stormy Atlantic. These overcrowded ships often arrived with only 60 to 70% of their original passenger list, many dying of illness and the elements, were buried at sea. In North America, early immigrants bearing the family name Ansley, or a spelling variation of the surname include:

Ansley Settlers in United States in the 19th Century

Ansley Settlers in United States in the 20th Century

Ansley Settlers in Canada in the 18th Century

Ansley Settlers in Canada in the 19th Century

Ansley Settlers in Canada in the 20th Century

Ansley Settlers in New Zealand in the 19th Century

Historic Events for the Ansley family +