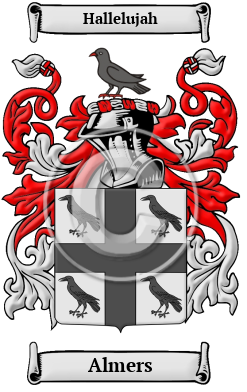 The Strongbownians added their own naming traditions to the eastern region of Ireland to which they arrived. The impact of this new tradition was not extremely disruptive to the pre-existing Irish tradition because the two had many similarities. Both cultures made significant use of hereditary surnames. And like the Irish, the Strongbownians often used prefixes to build patronymic surnames, which are names based on the given name of the initial bearer's father or another older relative. Strongbow's followers often created names that were built with the prefix Fitz-, which was derived from the French word fils, and ultimately from the Latin filius, both of which mean son. They also used diminutive suffixes such as -ot, -et, -un, -in, or -el, and occasionally even two suffixes combined to form a double diminutive such as -el-in, -el-ot, -in-ot, and -et-in, to build patronymic names. The surname Almers is derived from the Anglo-Saxon personal name Ædelmær, which literally means "noble, famous." The Gaelic form of the surname Almers is Aighlmear.

Early Origins of the Almers family

The surname Almers was first found in Essex, where they were tenants in chief and Lords of the manor of Aylmer.

"This family trace their name and descent from Ailmer or Athelmare, Earl of Cornwall, in the time of King Ethelred. Allmor, in Welsh, signifies a valley or dale." [1]

"This Anglo-Saxon name came to Ireland after the Norman invasion and, settling in Leinster, families so called became hibernicized." [2]

Early History of the Almers family

This web page shows only a small excerpt of our Almers research. Another 82 words (6 lines of text) covering the years 1172, 1650, 1720 and 1678 are included under the topic Early Almers History in all our PDF Extended History products and printed products wherever possible.

Church officials and medieval scribes spelled names as they sounded; therefore, single person, could have his name spelt many different ways during their lifetime. While investigating the origins of the name Almers, many spelling variations were encountered, including: Ailmer, Aylmer, Elmer, Elmore, Ellmore, Ellmer and others.

Notable amongst the family up to this time was Matthew Aylmer (c.1650-1720), Lord Aylmer, Admiral and Commander-in-Chief, the second son of Sir Christopher Aylmer of Balrath, County Meath. "He entered the navy under the protection of the Duke of Buckingham, as...
Another 41 words (3 lines of text) are included under the topic Early Almers Notables in all our PDF Extended History products and printed products wherever possible.

Almers migration to the United States +

Ireland went through one of the most devastating periods in its history with the arrival of the Great Potato Famine of the 1840s. Many also lost their lives from typhus, fever and dysentery. And poverty was the general rule as tenant farmers were often evicted because they could not pay the high rents. Emigration to North America gave hundreds of families a chance at a life where work, freedom, and land ownership were all possible. For those who made the long journey, it meant hope and survival. The Irish emigration to British North America and the United States opened up the gates of industry, commerce, education and the arts. Early immigration and passenger lists have shown many Irish people bearing the name Almers:

Almers Settlers in United States in the 18th Century

Almers Settlers in Australia in the 19th Century