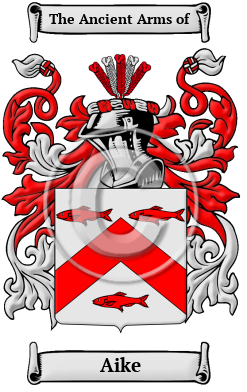 The Viking settlers of ancient Scotland were the first to use the name Aike. It was a nickname for a hooked or crooked person. This nickname was originally derived from the Old Norse word haki which meant "hook" or "something crooked." [1]

Early Origins of the Aike family

The surname Aike was first found in the county of Norfolk where Turkil Hako was listed there in Domesday Book [4]. Later the Assize Rolls of Lincolnshire listed Leuiua filia Hacke as holding lands there in 1218 - a very rare entry for a female or "daughter" to hold lands at that time. Later again, Gilbert Hale was listed in the Feet of Fines of Staffordshire in 1257. [5]

Early History of the Aike family

Intuition and sound were the primary sources medieval scribes used to judge appropriate spellings and translations for names. The spelling of a name thus varied according to who was doing the recording. The different spelling variations of Aike include Hake, Hakes, Hakke, Hacke and others.

Notable amongst the Clan from early times was Edward Hake, ( fl. 1579), an English satirist who was patronized by the Earl of Leicester, known for his Newes out of Paules Churchyarde, A Trappe for Syr Monye, whi was first published in 1567. No copy of the 1567 edition is known; but the work was reprinted in 1579. "From the dedication to the Earl of Leicester we learn that at this date Hake was under-steward...
Another 74 words (5 lines of text) are included under the topic Early Aike Notables in all our PDF Extended History products and printed products wherever possible.

Migration of the Aike family

In their new home, Scots found land and opportunity, and some even fought for their new freedom in the American War of Independence. Some, who remained loyal to the crown went north to Canada as United Empire Loyalists. In this century, the ancestors of both of these groups have begun recovering their illustrious national heritage through Clan societies and other Scottish historical organizations. Early immigration and passenger lists indicate many people bearing the Aike name: Thomas Hakes who died at Jamestown, Virginia in 1623; John Maximilian Hake who sailed to Philadelphia, Pa. in 1774 and Nicolaus Hake who settled in Philadelphia, Pa. in 1798..